With Spoiler Season officially underway, we here at Wreck ‘N Rule are trying our best to bring you weekly written reactions to the cards spoiled thus far. We are doing our best to react to the cards as they are spoiled but sometimes life gets in the way, so weekly gives us a chance to get to them as we get time. With that being said, let’s jump right into it! 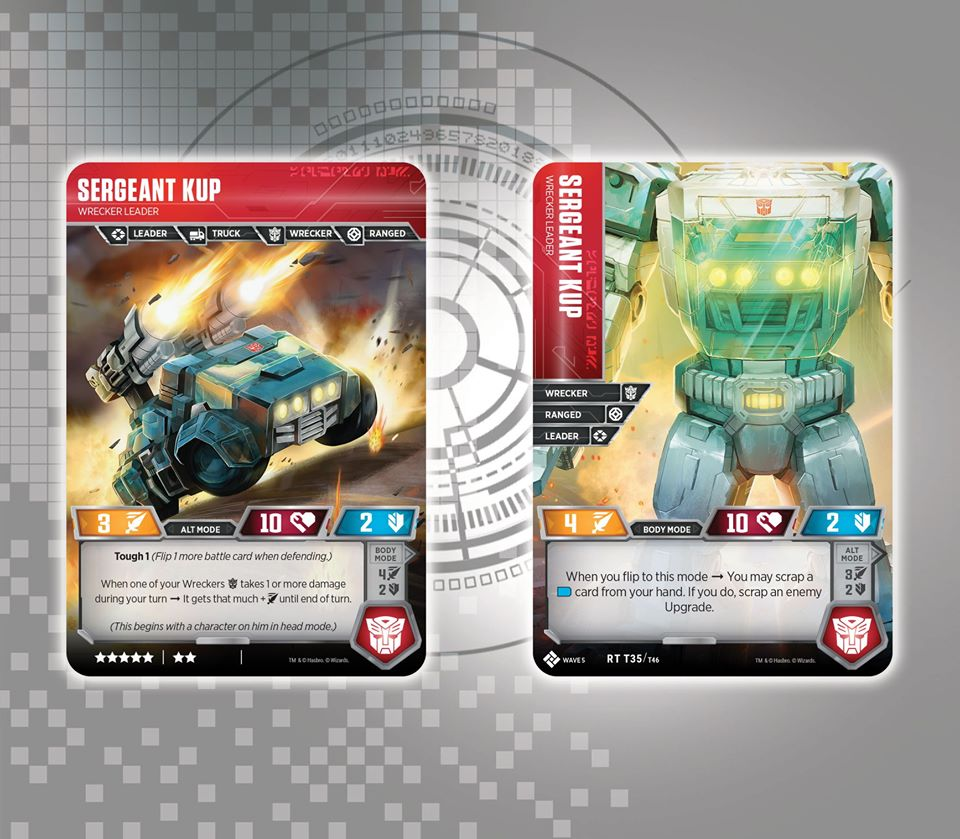 RJ: Something-Kup, something-meme, something-God. All I see here is the Wrecker keyword and how excited it makes us all. Diving into the card itself, I think his alt mode ability is really, really cool and very on-brand. It’s hard to put a Wrecker down in battle and they only seem to get more resilient the more damage they take, so it makes sense that when a Wrecker takes damage in the game they get a buff to their attack. The dream scenario? A fully untapped Wreckers team on one side (our side, obviously) and a fully tapped down team on the other side; play Photon Bomb; watch your opponent stare daggers and possibly leap across the table as you buff all your Wreckers by +2 attack. I will say, I do have the feeling that – based on Kup – all the Wreckers are going to be a bit squishy in terms of HP, but maybe that will be all Titan Master’s in general. Flintlock is like a late-game Raider Aimless with less health, annoyingly solid.

Tom:  Kup is back BAYBAY and boy does he have a lot to process here.  Wrecker keyword, Ranged, Truck, Leader, built in tough 1, and he’s…headless?  Adding in his head makes him 11 stars which turned me off a little bit as 11 stars for 10 health seems over costed, but then as it turns out his head gives him a total tough of 4 with a native defense of 2 so he’s going to be hard to kill in a blue deck.  That plus access to Matrix of Leadership and being able to attack buff himself when he takes damage makes him a nice new pairing for Static Laser of Ironhide. Can’t wait to see the Wrecker specific cards and the rest of the team so I can get building. 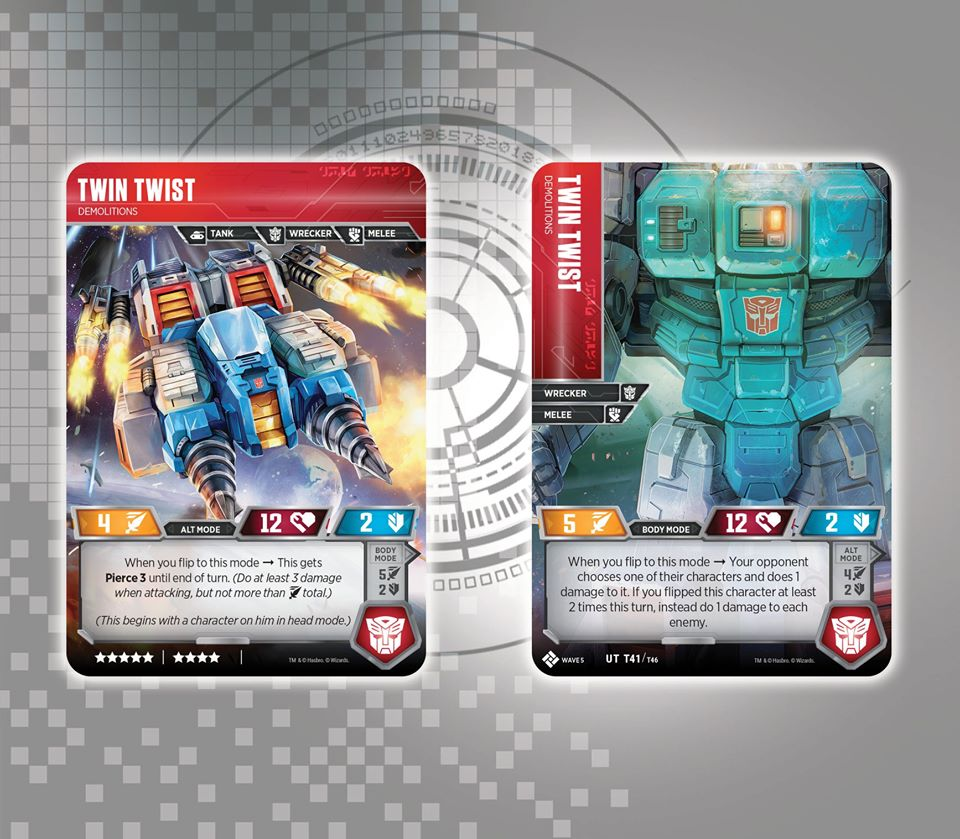 Brian: I’m already predicting that Joe is going to want to use Thermal Weaponry on this guy/Twin Twist.

Joe:  Someone say Thermohmygod Twin Twist+Flameout!  Could this be the end of Pierce cars? Are we moving into a Pierce Tank meta?

RJ: I feel like Joe needs an intervention on Thermal Weaponry. Or we all start mainboarding Stable Cover and Point-Defense System and not tell him.

Joe: Sorry, I can’t hear you over all these blues on attack.

Tom: He looks like he would be great to abuse Showing Off with, but I can’t talk right now cause I’m buying up all the Thermal Weaponry so Joe can’t get his hands on him.

Joe: A day late and a dollar short pal. 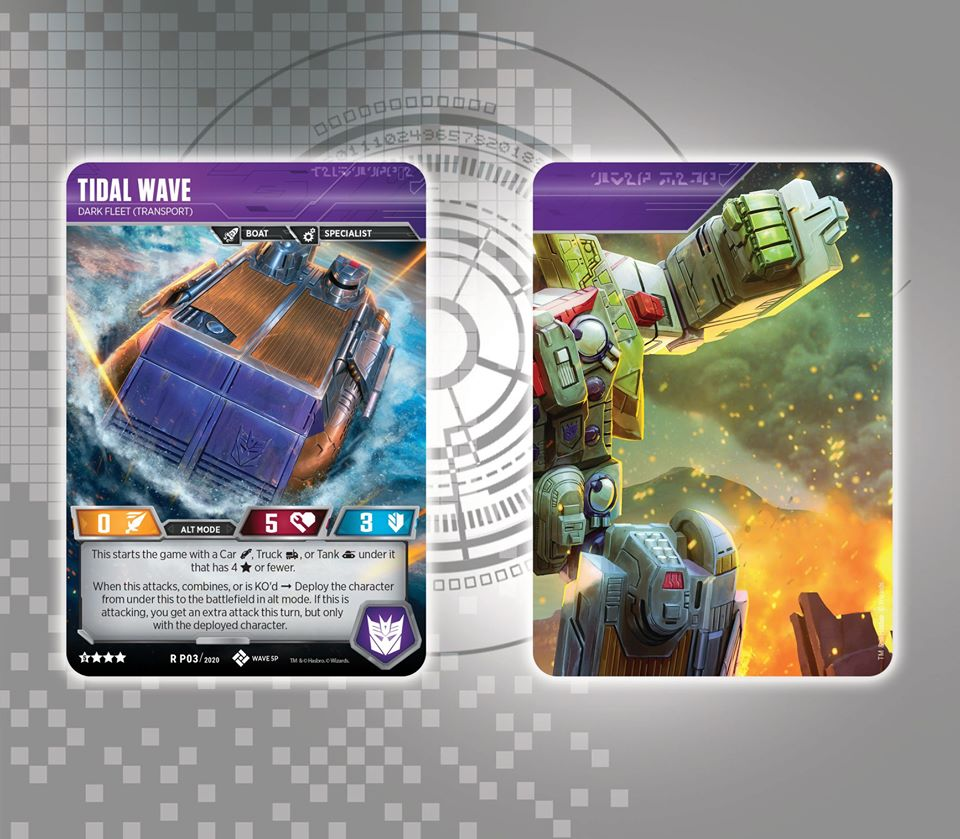 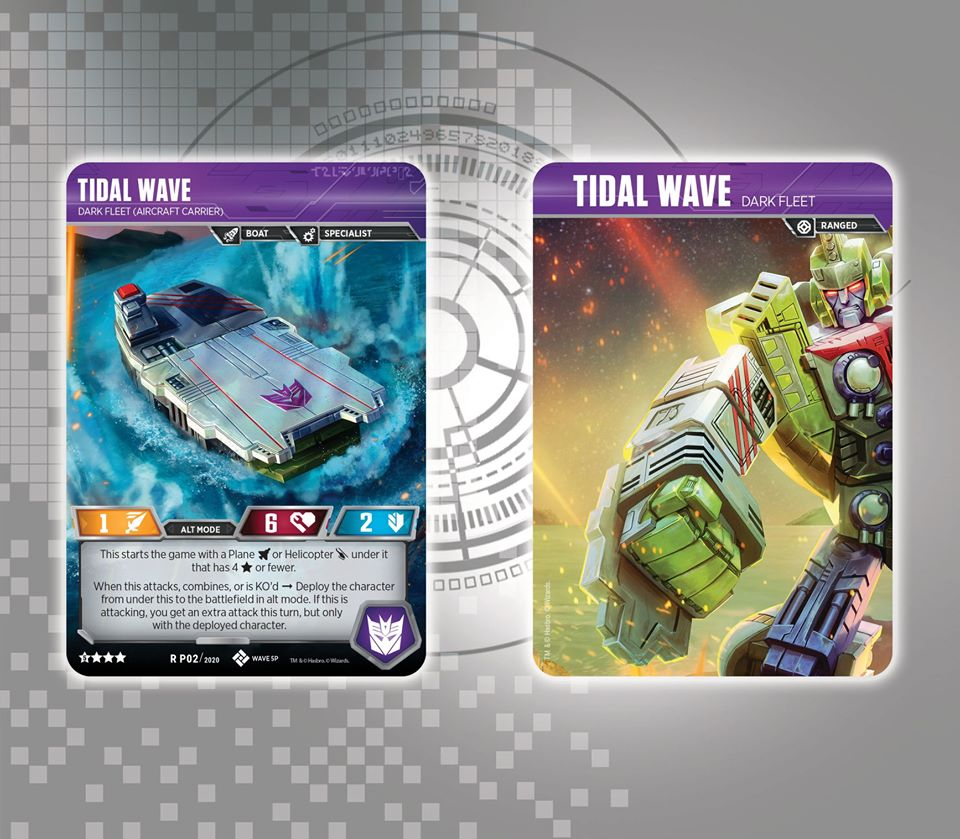 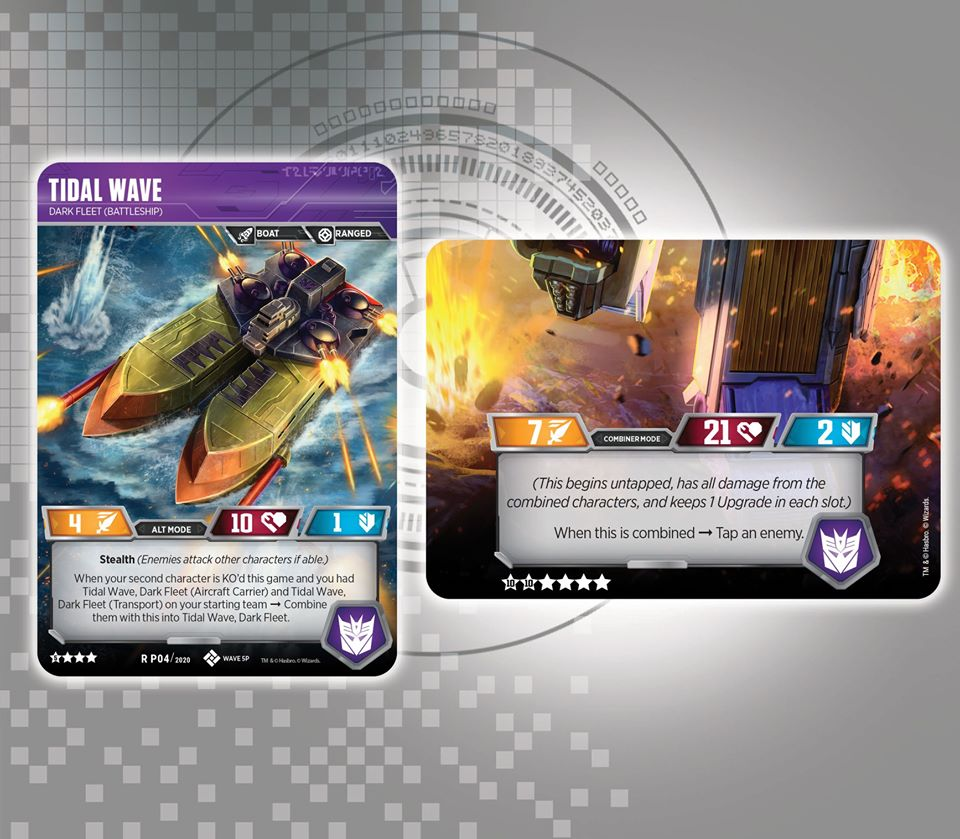 Brian: I’m really excited for Tidal Wave, for a number of reasons.  For one, I enjoy symmetry and it’ll be fun to throw him against Omega Supreme in a 3-member Combiner vs 3-member Combiner fight.  Secondly, we get a hint about a future 4 star Helicopter, which might mean more Micromasters, possibly even released in this wave?  Thirdly, we have the possibility for some battle card support for Boats. I also really like his “when combined” ability. RJ has been using Omega Supreme quite a bit recently, and I’ve found that if I can force the combine to occur when I have a big character ready to attack, I’m generally in a good position.  With Tidal Wave, though, you can deny your opponent that chance to have a big swing, and potentially smack down their most dangerous character. Finally, the idea of deploying cheap characters (probably Micromasters?) as ersatz Mini-cons is really fun.

RJ: I won’t lie, I’m a bit disappointed in this guy but probably not for the reason you think. As soon as it was announced that the promo for Wave 5 would be a 3-bot combiner team I immediately thought/screamed Reflector. We have the boomboxes, time to give us the triplets! Other than that, this guy seems fun! Combines (no pun initially intended, but then I realized he is a combiner and now I fully intend the pun) a few different mechanics in combining and deployment, which is awesome!

Tom:  The deployment mechanic seems intriguing to me, but when you look at it there has to be some support cards for him in this set.  His base attack values are very low and popping out a 4 star plan with on average 3 attack and no way to buff it (if you choose to attack twice in a row) seems a little underwhelming. RJ: Release event promo, Arcana. I think the main thing that has to be said for this is that it strongly, strongly hints at Brainstorm… Otherwise it’s a slightly worse version of Flintlock.

Tom: I like the +2 defense, I don’t like the 2 health, she’s too easy to take off the table with direct damage. 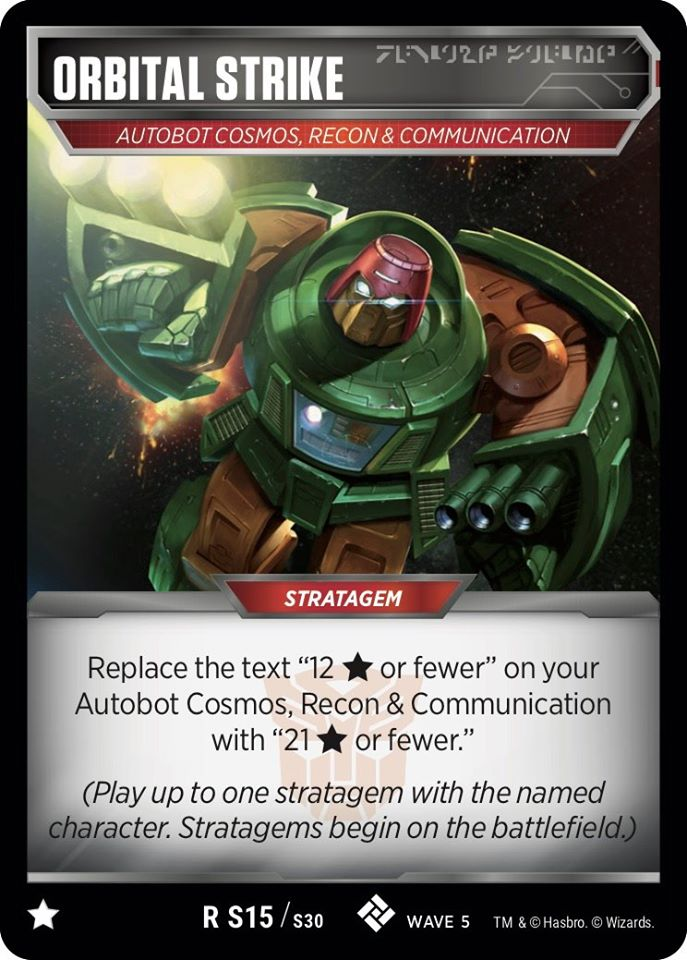 RJ: GIVE US ALL OF THE COSMOS SUPPORT. Man, I really love this card. My latest Cosmos deck is a four-wide that just stalls until Cosmos is ready to swing into who you want to KO, and I am able to trigger the ability fairly consistency. The only issue his text prohibits him from being good, and this card changes all that. For being only the second card revealed in this set, it’s already easily the one I am most excited about to use. I’ll have to swap out a member of the team to accommodate the star cost but I don’t think it’s a huge hit. See the game play footage here (sorry, Brian).

Joe:  Cosmos stratagem aside, it’s going to be exciting to see if the developers can counteract power creep with stratagemizing (made up word) old characters to either A) Make them relevant B) make them relevant again C) make them go above and beyond all imagination.  Case in point, Wave 1 Cosmos was basically unplayable because of how playable PrimeBL was. Nobody really gave MegsLW a shot. Now that Cosmos’s restriction has been buffed, it’s going to be interesting to see if a 3wide Galactic Prime team can outlast a 4 wide Cosmos team.

That’s all I’ve got.  I’m not good enough with numbers, counting, or planning ahead to effectively use Cosmos.  Between Joe, RJ, and Frenchie, I’m sure I will end up hating this Strategem.

So back in the day, one thing that hold up Cosmos from having a shot to the podium was that it couldn’t kill 13+ stars like OPBL. That limit to 12 stars has set my favorite UFO back to casual play. Now… let’s say that I propose you to play a 21 hp character that can one shot anything if you shuffle during your attack for ONLY 12 stars, wouldn’t you like try it as soon as you can? I know I would. And I will. Couple with all new cards that let you draw, bold,tough and etc, I think this has the potential to cause some headache for new competitive 3 decks to solve going forward (please WotC, don’t make card that would thwart stratagem 😥).

Tom:  Thanks guys, now I have to play against Frenchie & RJ’s Cosmos deck every week for the foreseeable future….. 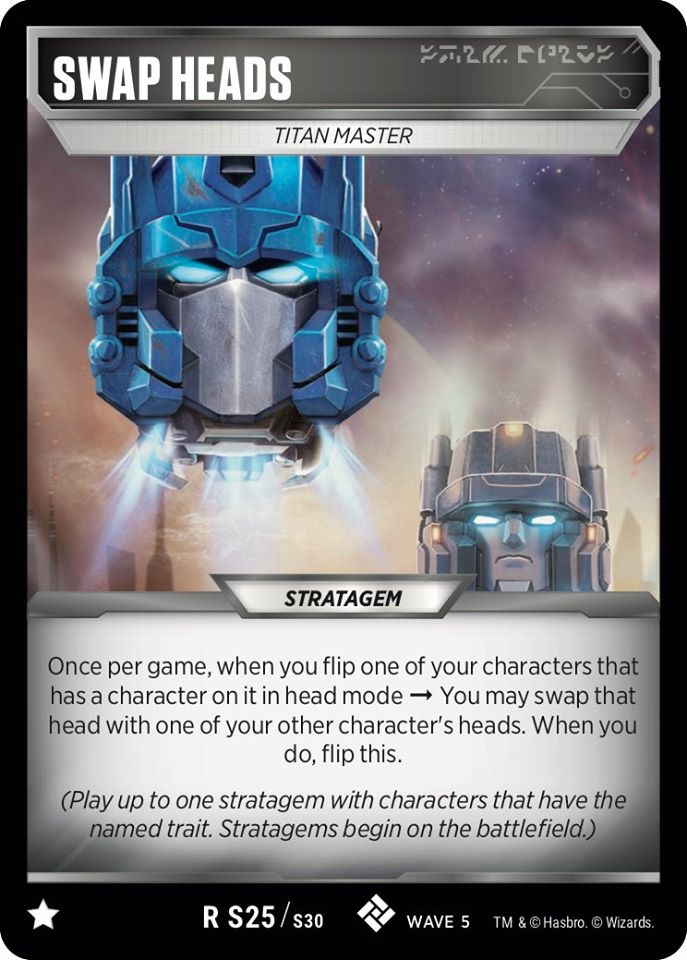 RJ: Hard to judge how good this card will be with only three heads revealed thus far, but you can see the potential usefulness of it. This is a free action for the turn that essentially lets you swap upgrades. While you have to flip a character to make use of this Stratagem, there are still ways for it to interact on your opponent’s turn (Swerve, for instance). Use Flameout (Bold 2) for attack, lay down a Swerve, and Swerve into Flintlock (Tough 3) on your opponent’s attack. I’m curious to see what else you’ll be able to do with this Stratagem as more cards are revealed.

Brian: I have a feeling that I’m going to have trouble with the idea of putting one character’s head onto a different character’s body.  Early in the game’s lifecycle, I had trouble pairing Autobots with Decepticons, but eventually got over that mental block. I’ve never quite been able to break the inability to use two of the same character in a list.  Time will tell if I can break myself of this inclination.

Tom:  I am in agreement with Brian here, I can’t from a thematic standpoint swap the heads of two different characters it just seems wrong to me.  That being aside, if I were to use this card it’s still up in the air for me if 1 star is worth swapping, I will need to see the rest of the cards to make that determination.