We’re just about a month (!!) away from Wave 5’s official release now and I feel like it was just yesterday that the first spoiler was released. New cards are being released faster than we can keep up with them, so we’re trying out putting pen to paper on the reveals that really make us say “wow.” Here’s what happened last week. 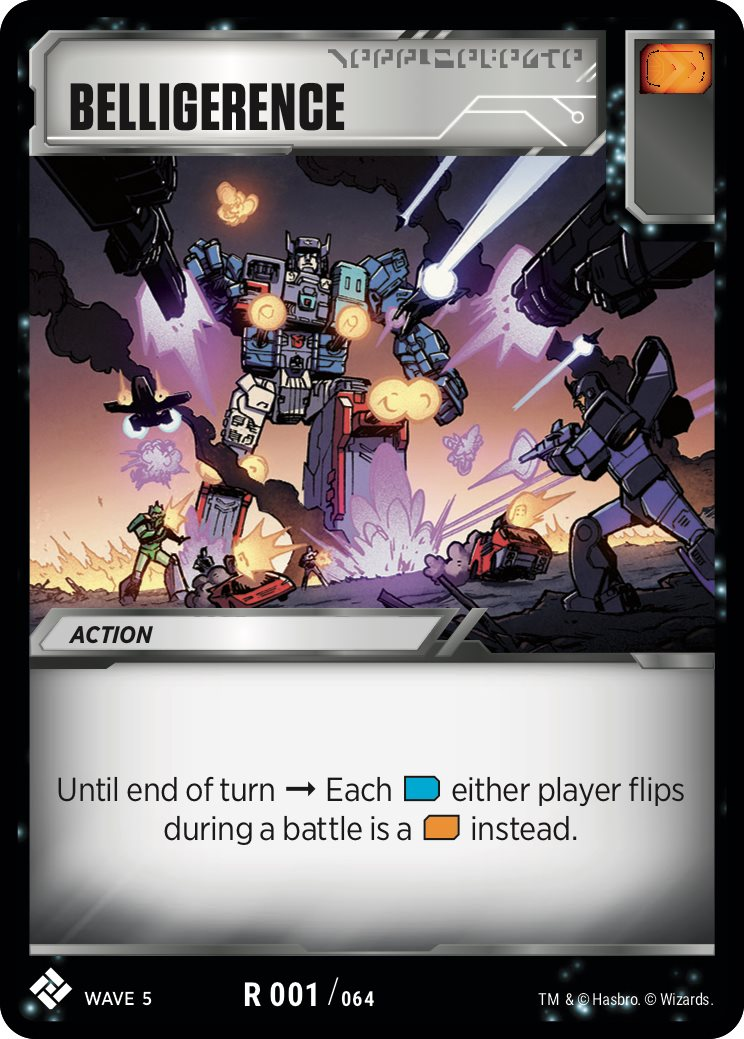 Revealed by Blues on Attack

RJ: This card is aptly named, as the card itself is belligerent. I think this card is really good and it’s easy to see why. Things like Hidden Fortification, Reinforced Plating, etc. become useless once this is played and the smattering of blue in your own deck becomes even more powerful. What makes this card even better is that the effect takes place until the end of turn, so if you’re wider than your opponent then they’re in for a world of hurt. I truly believe this card will be a staple in just about every deck one way or another.

Joe:  Blues on Attack gets to reveal a card that makes you want to flip blues on attack?  A+ WotC. This card is going to punish decks that stack Tough. Coincidentally, this will turn Black/Blue cards into 1attack1pierce essentially adding more “orange/black” cards to a deck under certain conditions. 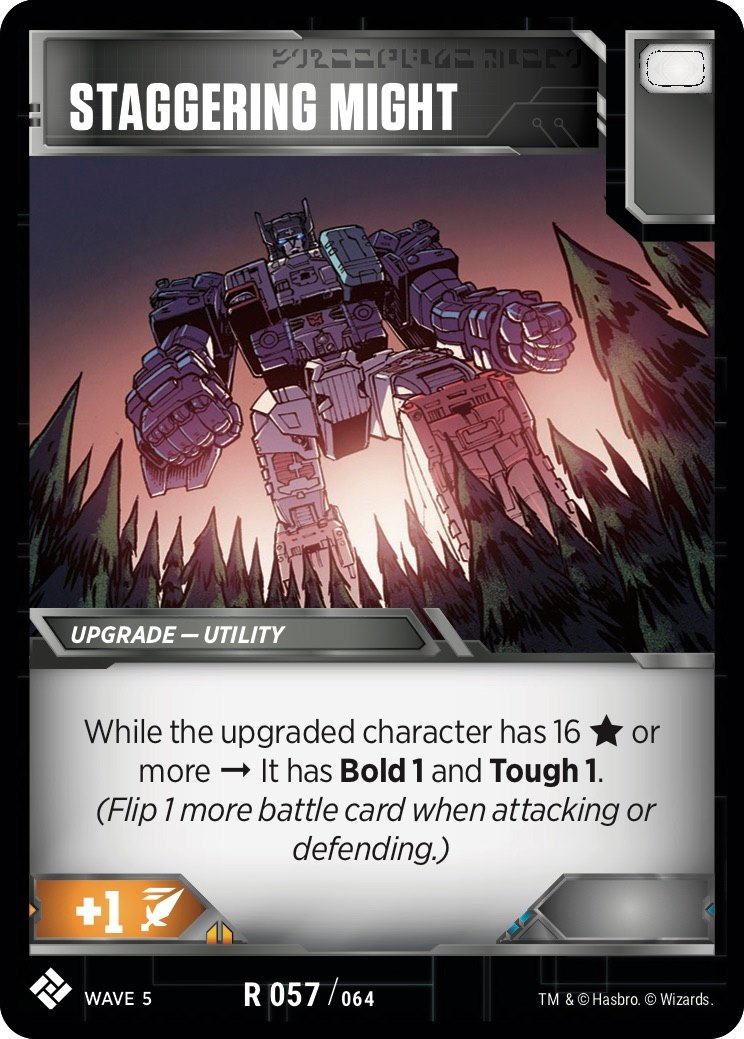 Joe:  Fort Max on the artwork? All I can focus on right now is tossing this into a Metroplex deck.  I’m sure this will be a beneficial card for FM though. Will Jetfire2 be using this? Probably.

RJ: Metroplex loves this card, and paired with Wave 4 Jetfire it essentially gives him Bold 2 and Tough 2 perpetually. The +1 in a utility slot is just an added bonus. Can’t forget to mention pairing this with Galaxy Prime and seeing extra cards on your attack flip to proc his ability. This is just about an auto-include in every deck that has a 16-plus star character. 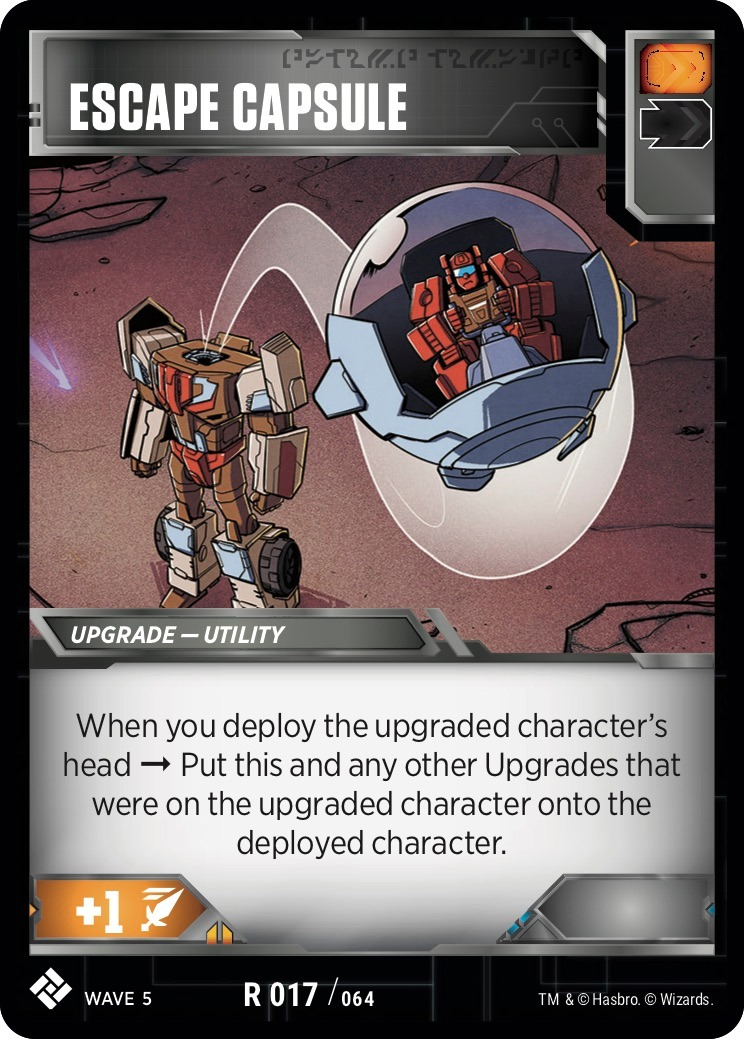 Joe:  Despite being a orange/black, will this become a staple amongst Titan Master decks?  What is your goal with your upgrades? Could we see a Titan Master popping off a body becoming equipped with Master Sword, Ghost Shield, and Minor Medkit?

RJ: “…his son, Elroy.” I don’t have a lot to say about this, another +1 from the utility slot is nice. I’m more excited to use this for Overwhelming Advantage as you get a different color combination for your utility slot that opens up other avenues elsewhere. Backup Beam/Escape Capsule/Forcefield is doable off the top of my head. 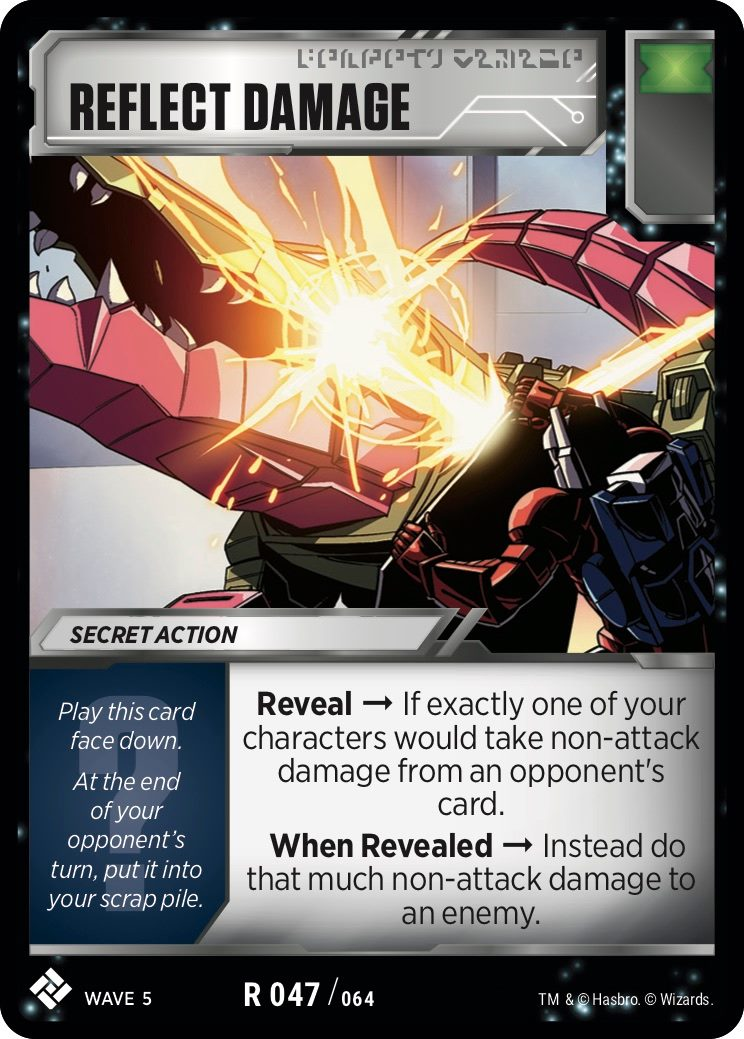 Brian: I hate OA.  I love this card.  Even outside of OA, I still think this is worth considering with the popularity of Ranged-based decks.  We’ve all been in that situation where an opponent is able to finish off our (almost dead) only tapped character with Sturdy Javelin, then have their pick of which target they’d like to sink a big attack into.  This negates the Javelin play and forces them to waste that attack into that character. If I’m reading this correctly, it’ll also punish a poorly timed One Shall Stand with the initiating playing sinking 6 total direct damage into their own characters.

Joe:  Auto-include 1-2 into your sideboard from here on out?  How prevalent is OA in your local meta? Just the thought of this card existing should be enough to make your opponent think twice before their OA play if you have a secret action in play. 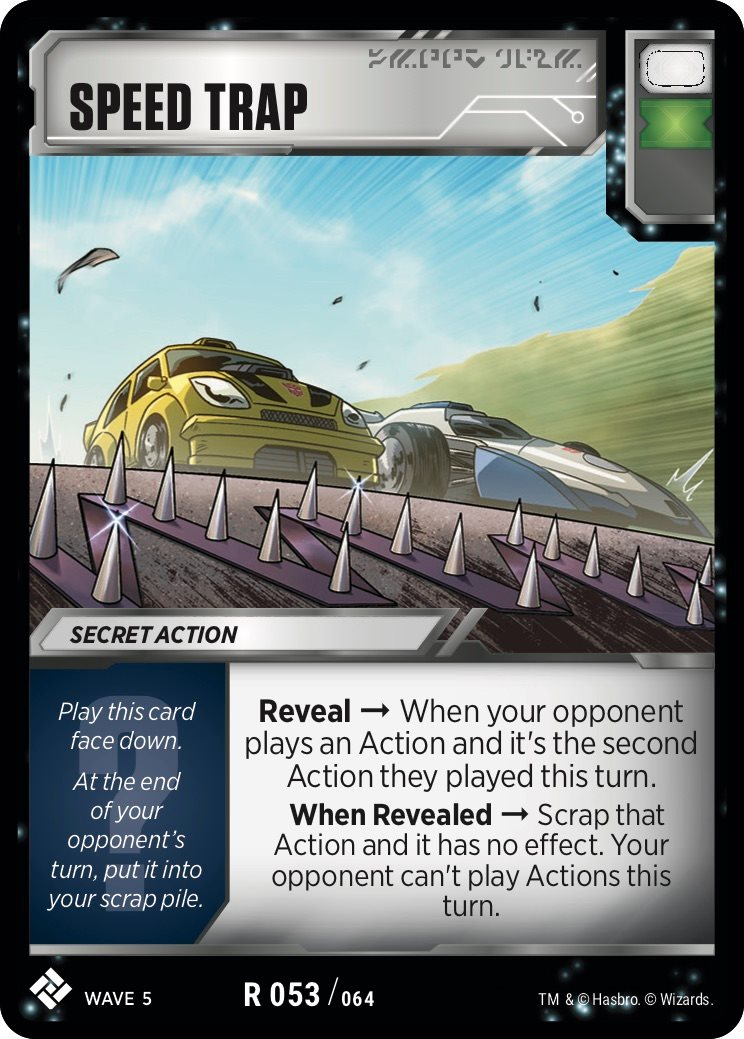 RJ: Well, I think we found out how WotC anticipated on stopping or slowing down the Daring Escape decks. This set, so far, is rife with sideboard cards. Obviously this is something you don’t want to play main deck, but sideboard? If you’re even the slightest bit worried about DE, you need to have at least two of these in the side, in my opinion. 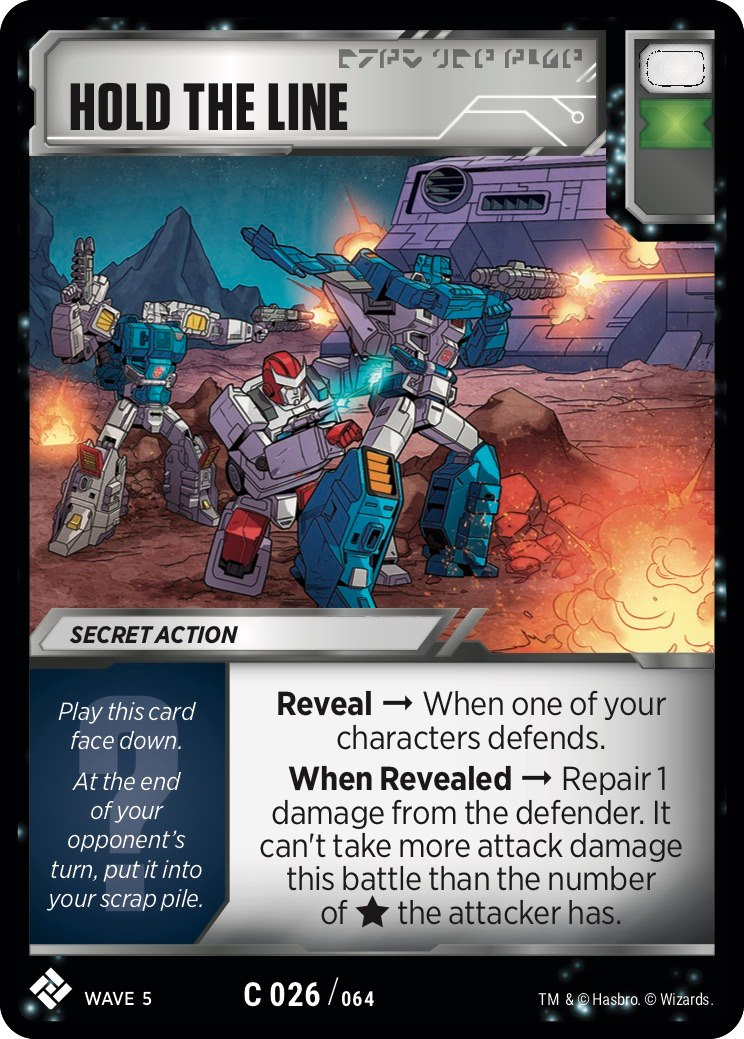 RJ: I think this card will see a ton of play as it’s somewhat of a direct counter to the Airstrike Patrol that is currently running around everywhere. Having a green pip makes the card that much more tasty. This, obviously, also works well against bugs as the highest star character on that team is 7. The healing is not insignificant either as it can potentially take you out of range of direct damage that would finish you off. I like this a lot for both orange and blue decks as this works against pierce as well.

Joe:  More side board goodies.  Does this push Arcee1 off the table for good?  Kickback1? Any bold heavy Micromasters? Orange based combiners? 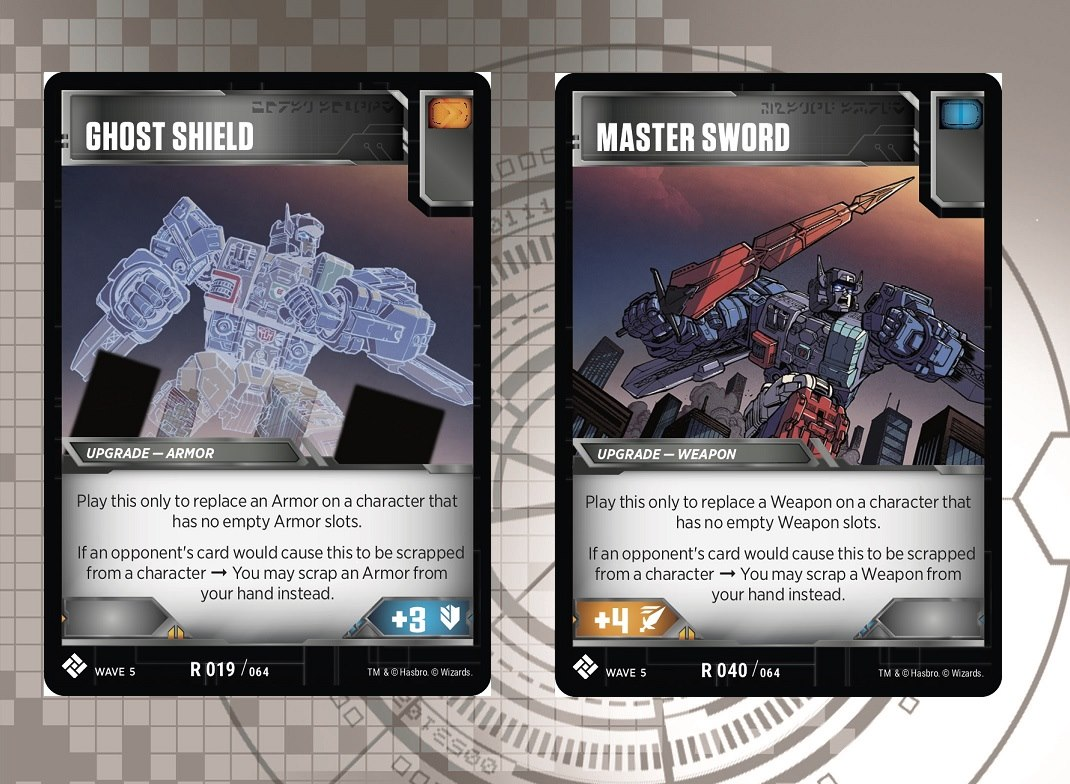 Joe:  I am going to need to playtest with these cards and maybe try to abuse them with Metal Detector and Roadbuster?

RJ: Ghost Shield is great for Aggro Tanks! Hunker Down into it is a super strong play, better than Composite Armor in a lot of instances since it sticks around. Master Sword has obvious Zelda vibes and is a good late-game option for a final push or two when you already have a weapon equipped and might need an extra point or two of damage to seal the win. Pretty neat mechanics with both of these cards. 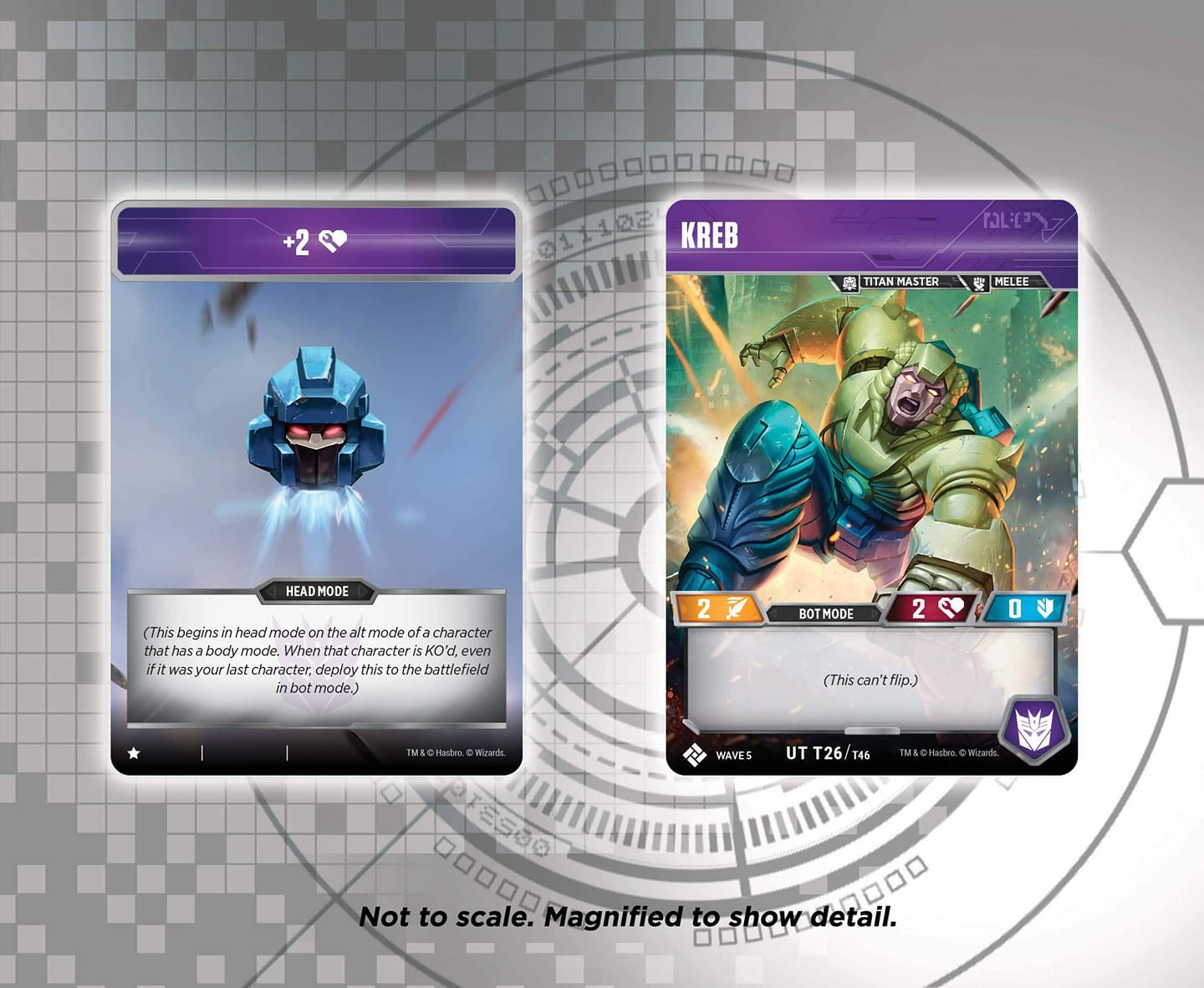 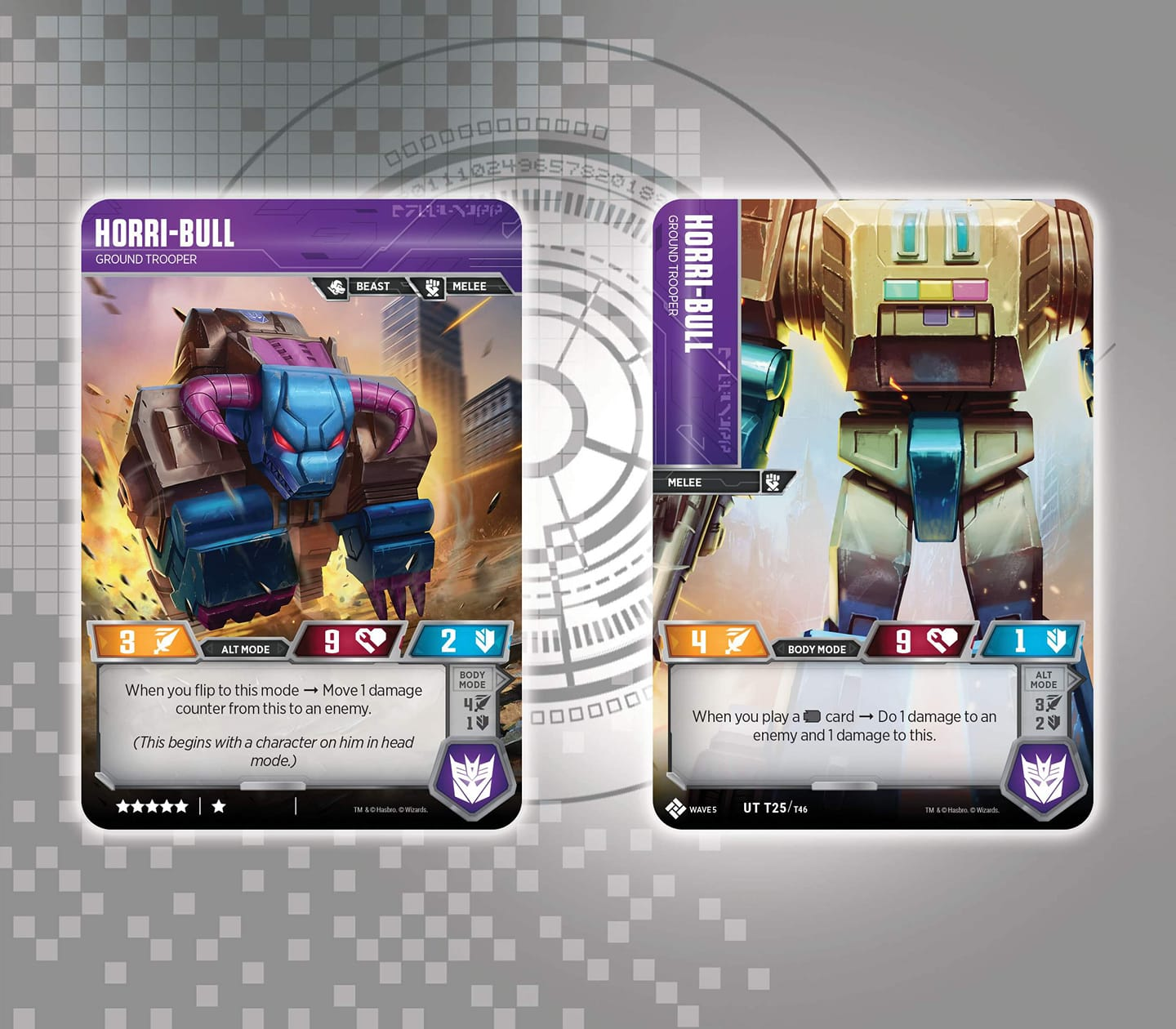 Brian: This guy with the canon head seems like decent little 7 point package.  I’m tempted to try him out with Detritus just to string some black pip triggers together and see what happens. Revealed by Ben’s World of Transformers

Joe:  Gotta admit, once I saw this card, I immediately got tunnel vision.  I don’t care if I bomb (pun) in testing or not, this card is my top priority to obtain and test.  The stratagem will be in my side board once we see how they are/aren’t allowed. Moved damage currently has the least amount of ways to be blocked or mitigated.  Can we defend and pass damage fast enough? Will the meta be shifting to black/orange?

RJ: This card is really good, I think. A better Slipstream, or maybe the best possible partner for Slipstream? I’m not sure about his Stratagem, but the character alone seems really strong. This allows you to play a suite of self-damaging cards with you able to mitigate your own damage and enhance your opponents damage. This turns Scouting Mission + Energon Axe into a free Energon Axe, OSSOSF into a 4/2 split, etc. and that’s just with Windsweeper without Slipstream factored in. 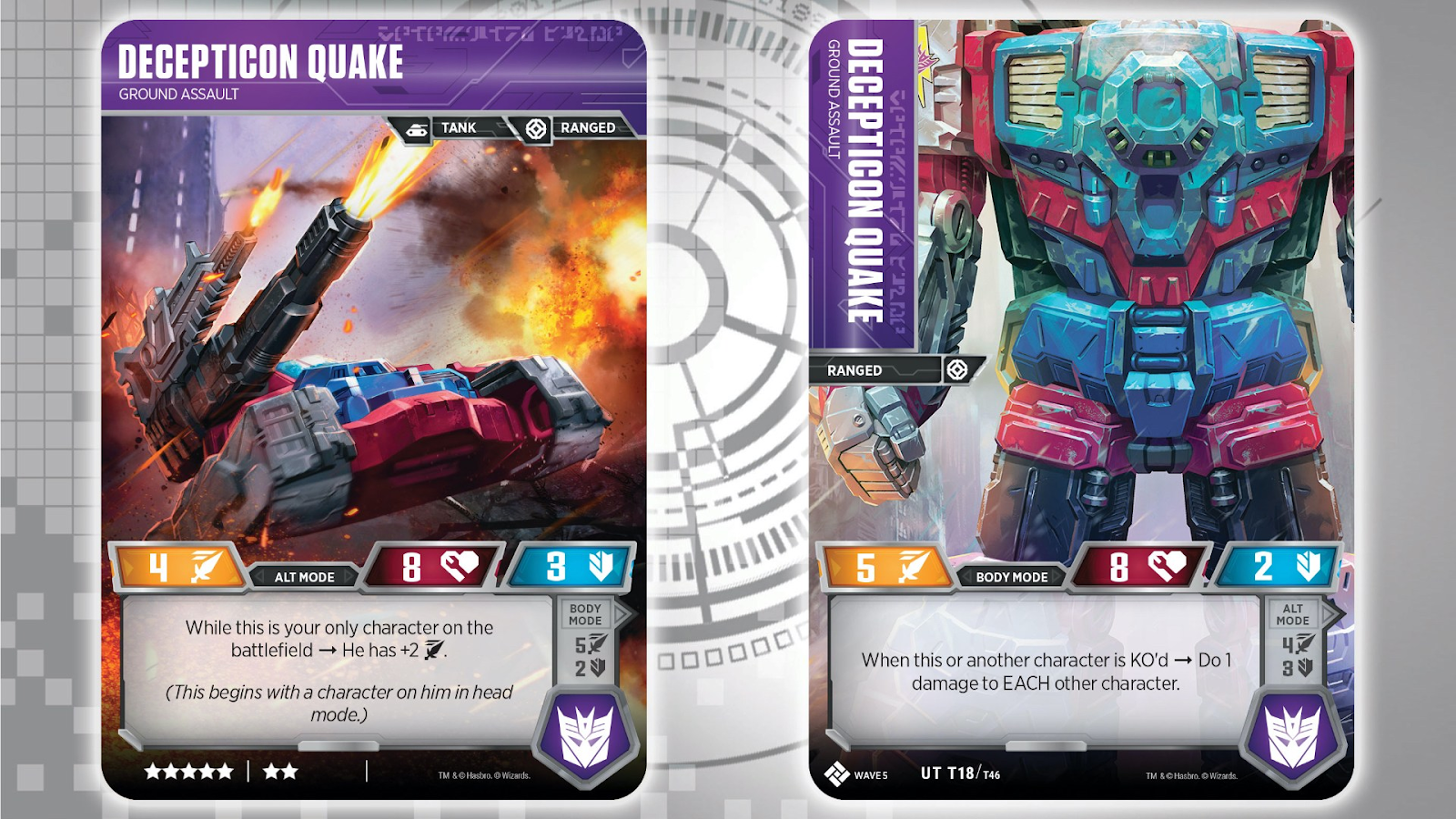 Brian: Quake is probably the character most likely to make me twitch when trying to build a deck.  With a base body of 7 stars and his canon head being an additional 4 stars that doesn’t grant extra health, I’m not comfortable investing 11 total stars here, even keeping in mind that Chasm is going to pop off and do his own thing for a turn.  If you want to get some true jank going, maybe try to get some weird plays with Involuntary Promotion? Brian: First of all, FANGRY.  Second of all, THAT ALT MODE ART IS SO COOL.  Fangry exists with Apeface in that BOLD and TOUGH zone that can be difficult to use well.  My initial instinct here is that you want him in a blue/black deck, to be able to make use of both of his alt mode abilities.  8 stars for 14 health seems good, especially with Brisko popping off and then having an additional 3 health on top of that. 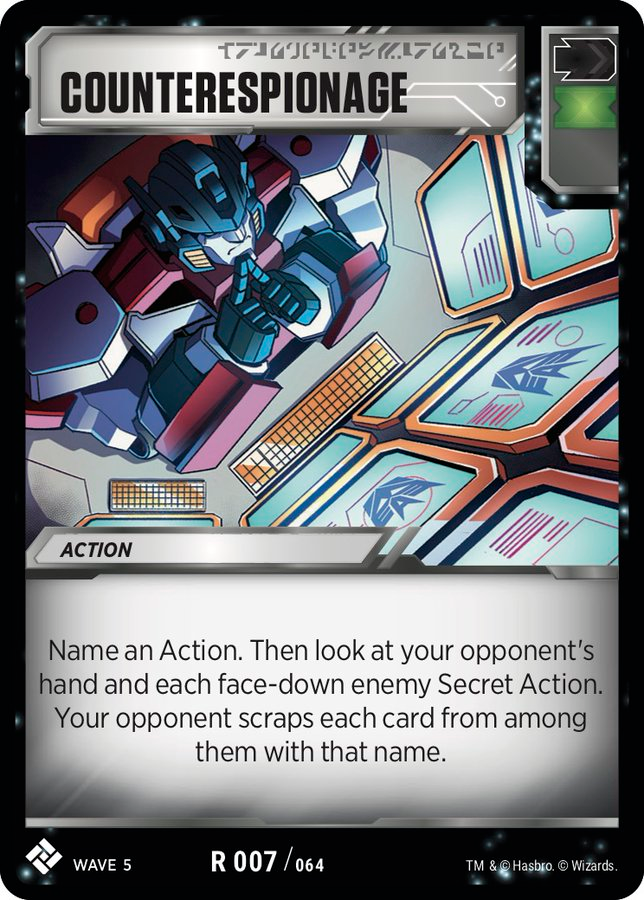 Brian: I like this a lot.  I’ve come to the feeling that Sabotaged Armaments is maybe a little TOO good (I wish it only knocked off ONE weapon as opposed to all weapons).  I’m glad to finally see the ability to remove Secret Actions from the table.

RJ: It seemed like this set was geared towards speeding the game back up, and pushing more orange or mixed decks rather than the heavier blue we’ve been seeing since the summer. This card directly counters all of that, but is still kind of a difficult card to use. First, looking from the opposite side of this card, you’re now going to have to include at least two different secret actions in your deck unless you are willing to get picked apart by this card, which might immediately become a three-of in all decks. Looking back from the player of Counterespionage’s standpoint, you have to make sure you don’t whiff on this if you are guessing a specific Secret Action that is in front of you. It’s a very skill-heavy card, and one that I’ll be lucky to use correctly once out of every ten tries.