Carl Endres AKA Technomagus, member of Aequitas and The Ark, brings you a special look at SPECIALIST COUNTDOWN.

To the surprise of no one who watched my interview with Transform Your Game, I love Combiners and City-Bots.  It should also come as no surprise, then, that Omega Supreme, being both a City-Bot and a Combiner, is one of my favorite characters from Wave 4.  Being a 22-star team all by himself doesn’t leave a lot of room for customization, however, except in the variety of Star Cards you choose to run with him.  Wave 5 brought us Heroic Spotlight, allowing a fourth star card, but I thought I could do better.  Enter:  Specialist Countdown.

Being a four star character, and a Tank at that, Countdown’s stats are pretty lackluster.  Having only 6 health makes him quite fragile, especially with 2 attack and 1 defense in Alt Mode, with the reverse in Bot Mode.  His real strength, of course, lies in his abilities and what he brings to teams that want to include him.  Now, there’s a lot to unpack here for the little guy, so let’s take a quick look over his abilities: 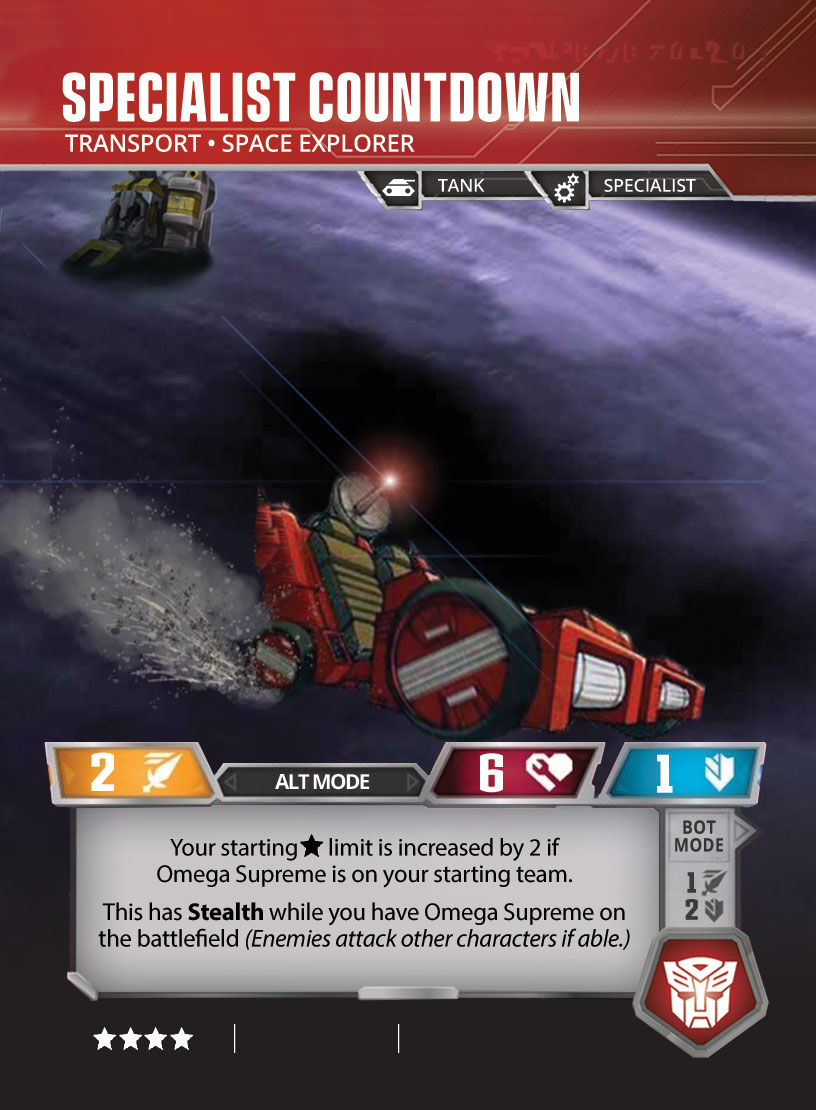 “Your starting star limit is increased by 2 if Omega Supreme is on your starting team.” This is a fun little bit of tech that I borrowed from Blaster and Soundwave.  Rather than make an actual 2- or 3-star character (which can cause all sorts of issues with team balance), I instead gave Countdown a team limit increase that allows him to effectively be two stars when teamed with any number of Omega Supremes.  This also means that he can pair with the Wave 2 Promo Omega and another 4-star character which allows that Omega to finally go 3-wide.  The first draft used a much more cutesy “Your starting star limit is increased by 1 for each Omega Supreme on your starting team” which gives you three extra stars for Wave 4 Omega, but only one extra for the Promo.  This would significantly help W4 Omega, but I also wanted Countdown to support the original attempt at Omega as well, so I went back to the drawing board for the ability.  Do note, that you only need one piece of Omega to get the cost reduction, so you can do something like Countdown, Omega Tank, Impactor, Top Shot, and Flak for a 5-wide Autobot Tanks team, if you want.

“This has Stealth while you have Omega Supreme on the battlefield.” Much like how the patrols in Siege and Siege 2 had Stealth while untapped, Countdown has a similar situational Stealth ability, this time being dependent on being paired with Omega.  This is in reference to the Siege Omega Supreme toy coming with a Countdown Micromaster figure that could ride around in the spaceship or tank components of Omega’s alt mode(s). 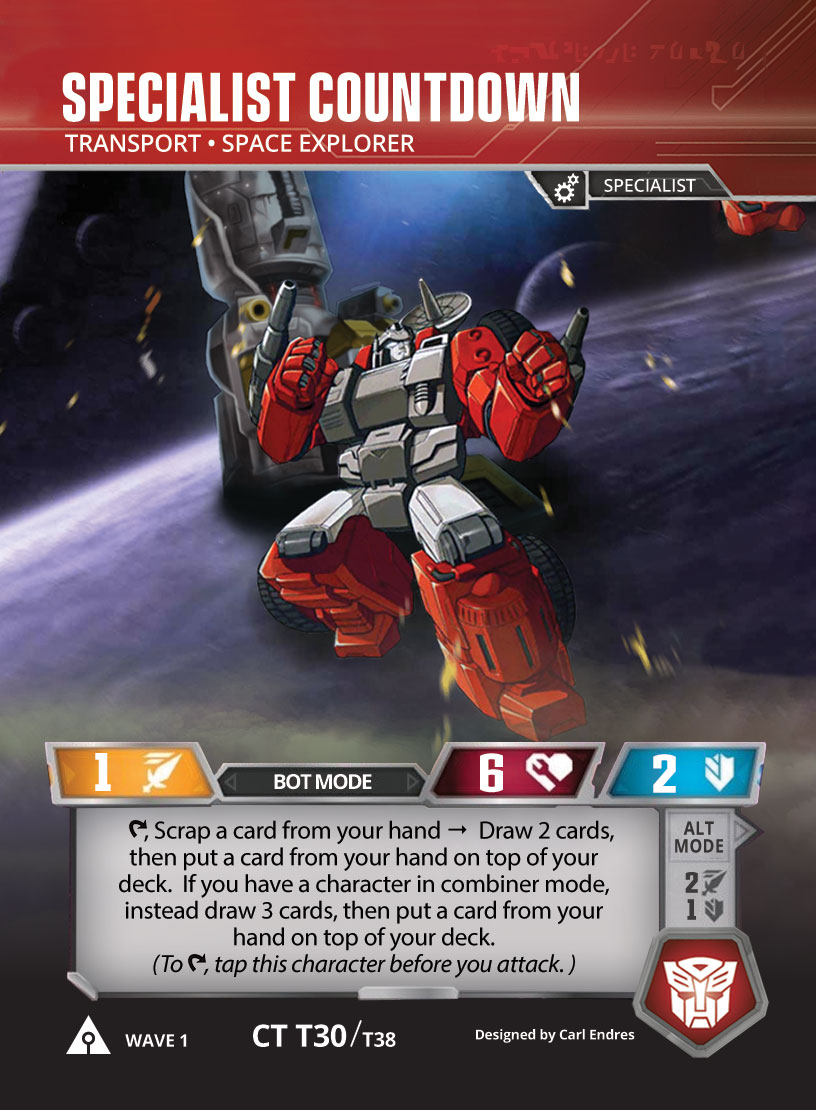 Of course, a card preview wouldn’t be complete without a sample decklist to show of its new potential, so here’s a fun little build to try and revitalize a Blue-based Captain Omega Supreme with some help from The Ark’s Wave 1 set:

You may notice a few other cards presented here that aren’t part of the original Waves 1-5.  As I’ve said before, I wasn’t the only one who wanted to give Omega some love with this set.  RJ from Wreck’n’Rule and Matafer both had some ideas as well, which were refined into two new Upgrades to give Omega that push he needs to rumble with the bigger boys. 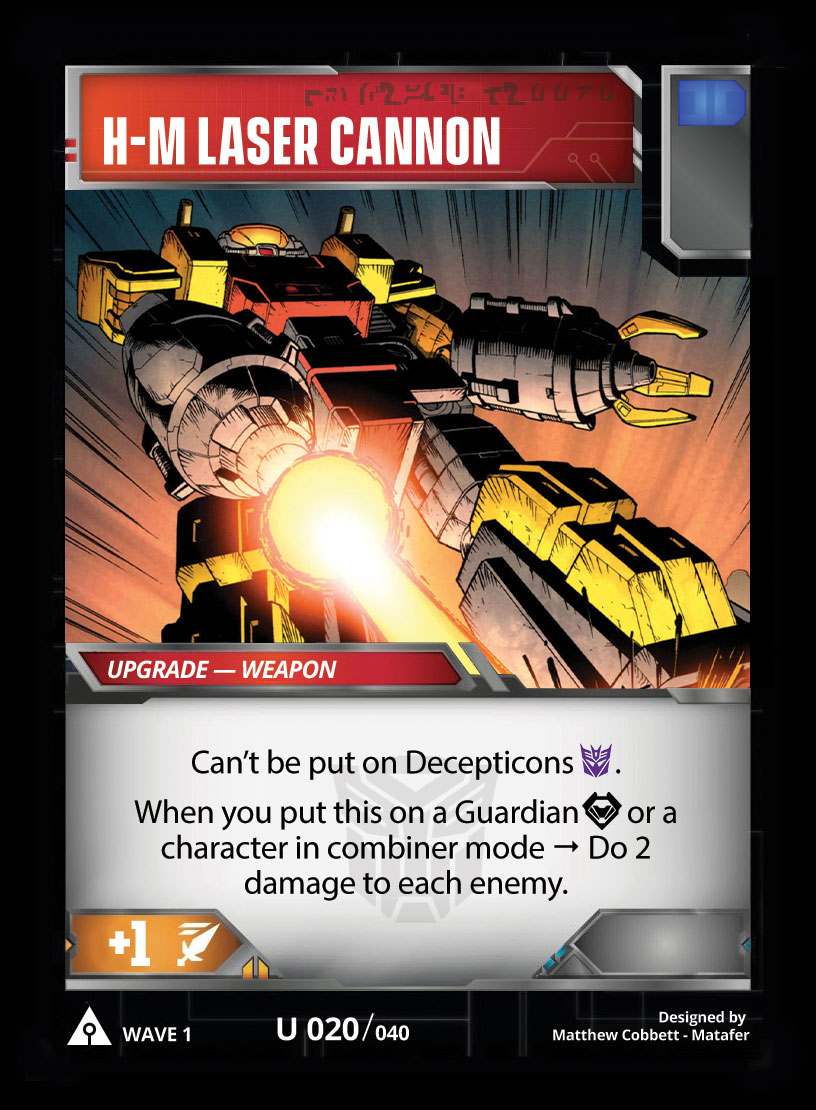 First up, we have Omega’s new Weapon:  the H-M Laser Cannon.  Designed by Matafer, this is an upgraded Armed Hovercraft for Autobot Combiners and Omega Supreme.  Representing Omega’s powerful arm cannon, it allows him to cut a swath of damage across a wide board, softening up his smaller opponents.  However, unlike Hovercraft, this doesn’t activate in the early game unless you are using the Promo Omega Supreme, since only Guardians and characters in Combiner Mode are able to power its damaging AOE blast.  We decided to restrict this from Decepticons as they have some combiners that can activate this card’s effect significantly earlier than desirable, though it would have been kind of amusing to watch Predaking cycle through a bunch of these.  Titans, similarly, also can’t use it, since both Metroplex and Fortress Maximus already have powerful, built-in AOE effects at their disposal.  Like Hovercraft, the Laser Cannon has a Blue Battle Icon to help with defensive flips, so it’s a fairly easy swap for Aerialbots, and a possible consideration for Volcanicus or Sentinels, as well. 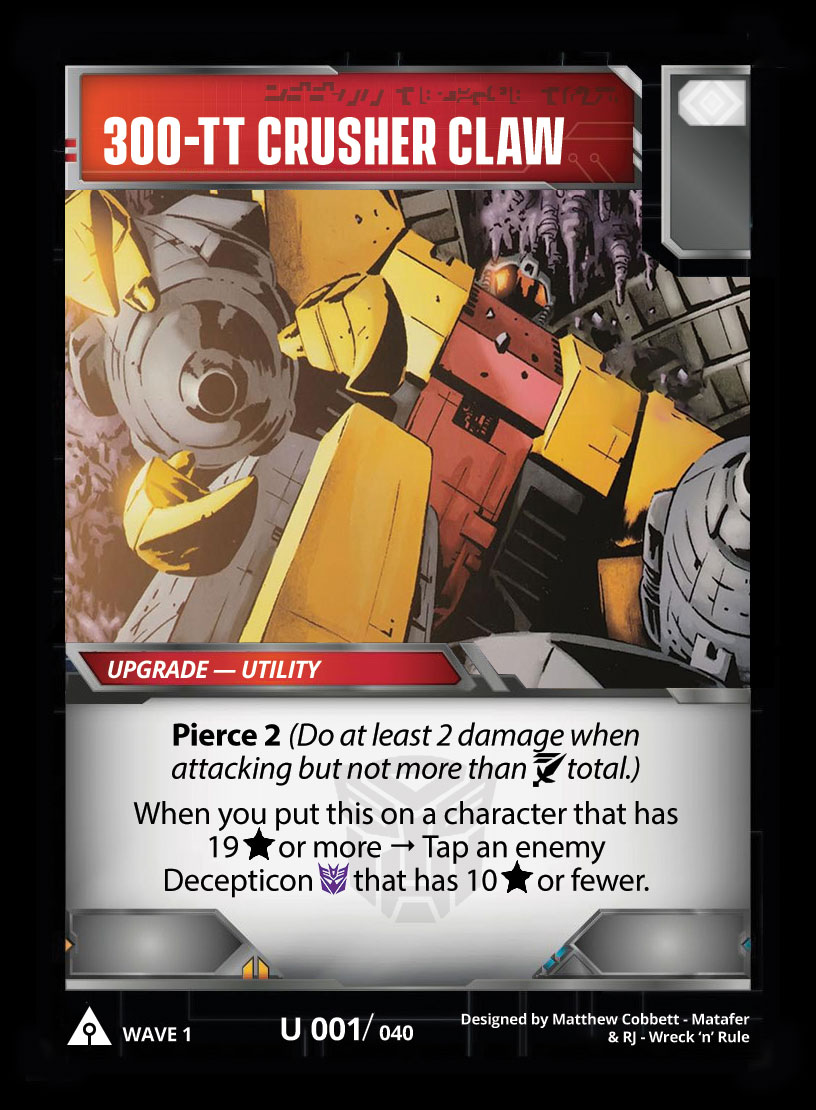 Next, we have a new Utility for Omega, the 300-TT Crusher Claw.  With a name and battle icon inspired by Joe’s love of drinking Whiteclaws, RJ and Matafer worked together to create this card, which originally started as another Weapon before we made it a Utility.  This pierce-granting Utility helps Omega draw some heat off of himself and Countdown by grabbing smaller Decepticons and tossing them away, tapping them.  This can be especially useful after the Untap, since Omega can leverage Countdown (leaving his companion untapped) to buffer a turn, then play the Crusher Claw on the next turn to lock down an opposing Decepticon, preventing a potentially devastating all-out-attack.  Or he can use the claw to grab a certain 5-star Plane out of the air after untapping, and go to town.  Unlike the Laser Cannon, however, the Crusher Claw was given a bit more utility in who can use it, granting the tap effect to anyone who has 19 stars or more, so most of our favorite Titans and Combiners (not you, Sky Shadow) get to use the claw to keep smaller Cons off their back.  And even if you’re not a Combiner, you still get the Pierce 2 bonus. 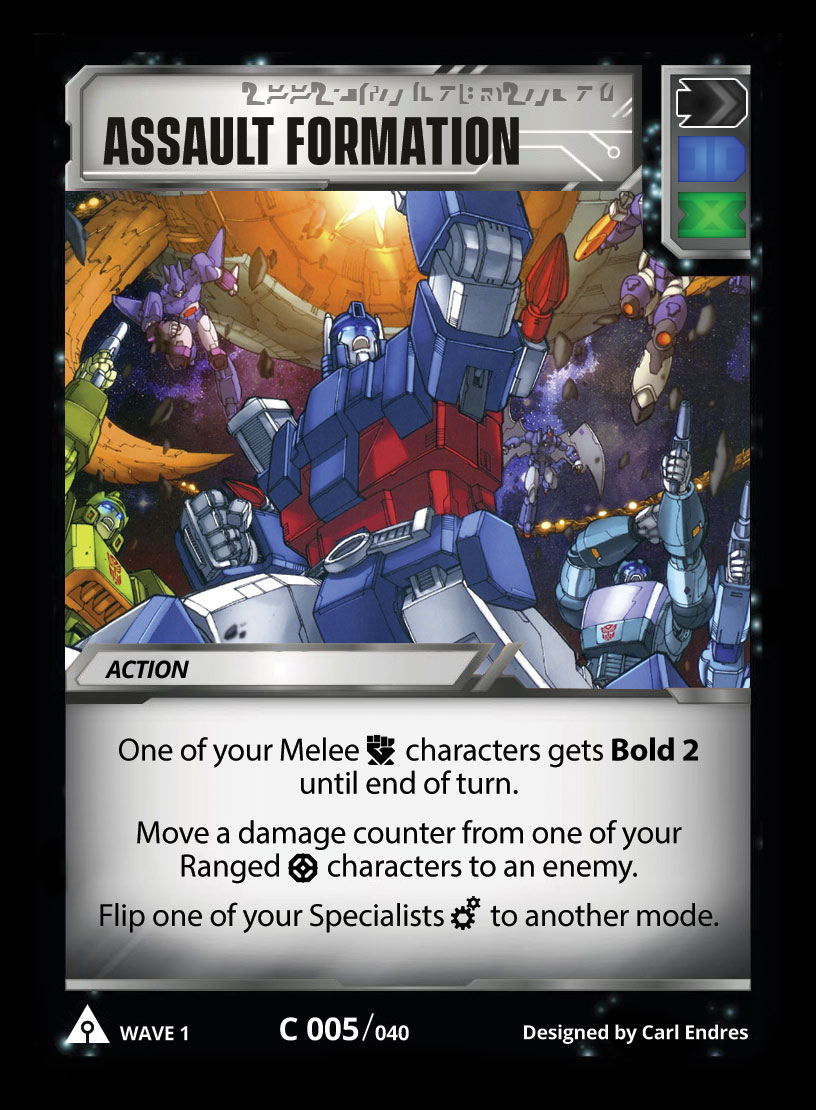 Finally, we come to another contribution of mine you may have seen before, Assault Formation.  Early on, Assault Formation helps you keep your Omega Tank and Spaceship healthy by moving damage off of them, and you can spend the flips on Countdown to keep him stealthy.  Once Omega combines, the first line of Assault Formation becomes active, giving Omega Bold 2, allowing him to dig for more Formations (Assault or Wedge) or other Green Icon cards like Pocket Processor, or to try and flip more Black battle icons to increase his Pierce value.  And, since Omega is both Ranged and Melee while combined, Assault Formation serves a similar function to Wedge Formation, being a more offensive source of healing; you trade the card draw for dealing extra damage instead.

Of course, as with any decklist, this is merely a starting point of ways you can explore what Countdown and these new battle cards bring to the game.  Some easy suggestions include adding in a small suite of Specialist gear for Countdown, with Multi-Tool enabling Master Sword plays to give Countdown some bite, or Field Communicator to dig deeper into the deck.  Especially since Omega Base is also a specialist, so it can benefit from these combos as well without becoming completely dead post-combine.  I didn’t make a sideboard for the deck, as that’s heavily meta dependent on what your local area plays, but you’ll also be able to find quite a few useful cards to help shake up some common strategies.  Marksmanship is a good starting point, especially if you expect to see more non-Titan Master characters.  There’s also <Redacted>, another The Ark Wave 1 card that’s even a possible inclusion for the main deck.  I’ll leave you some other cards I designed that you might want to consider for your sideboard the next time Planes or Secrets start giving you problems. 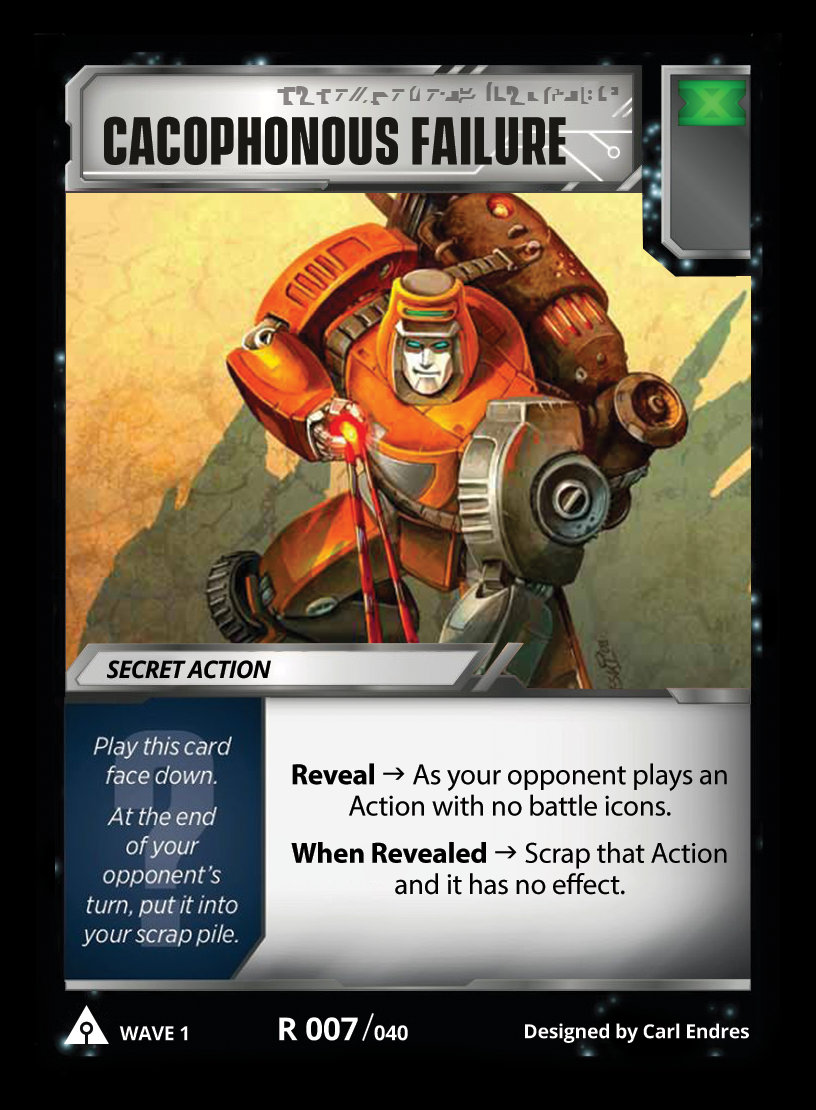 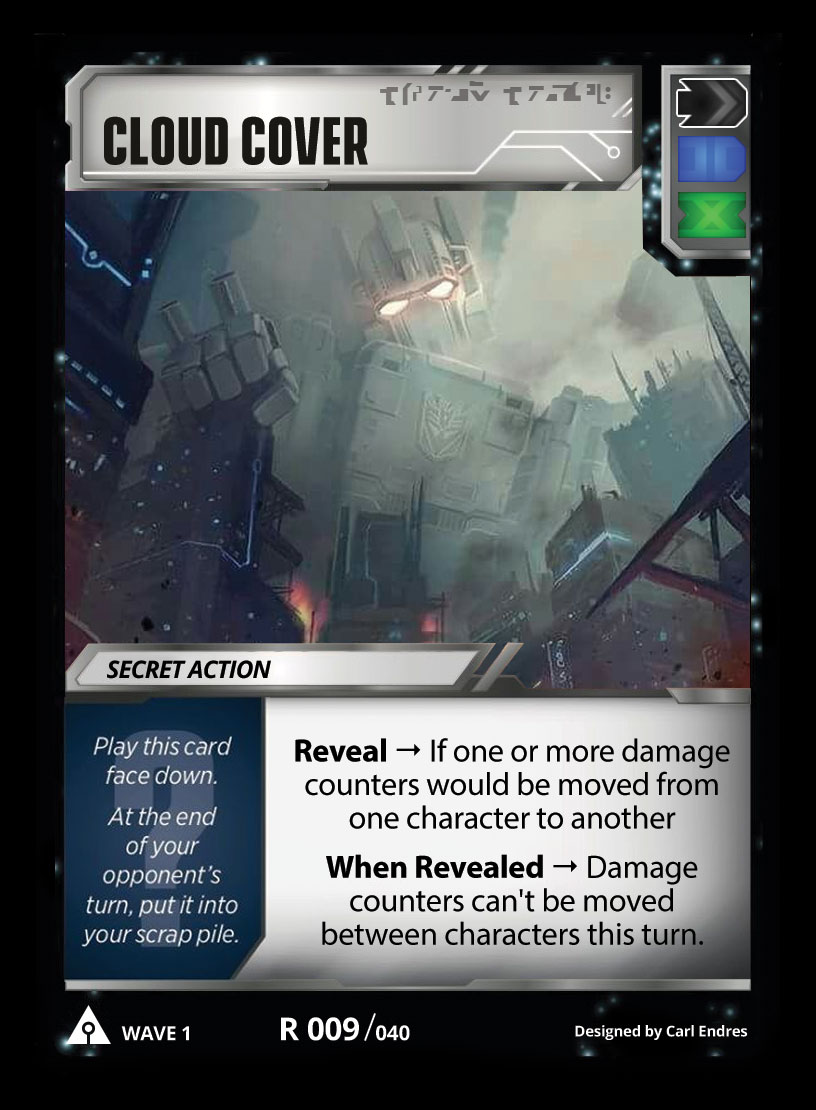