We’re now just about 2 months away from Wave 5 (!) and spoiler season seems to be in full swing. It feels like it was just yesterday that there were literally a handful of us at PAXU 2018 playing in the first officially sanctioned tournament. I remember the times when summers felt like a slow crawl and a week off from school felt like the same length of time. Now, I take a week off of work and I usually can’t tell you a single thing I’ve accomplished. While I want Wave 5 to get here today, I also don’t want to rush to it so let’s enjoy the slow burn that is spoiler season! 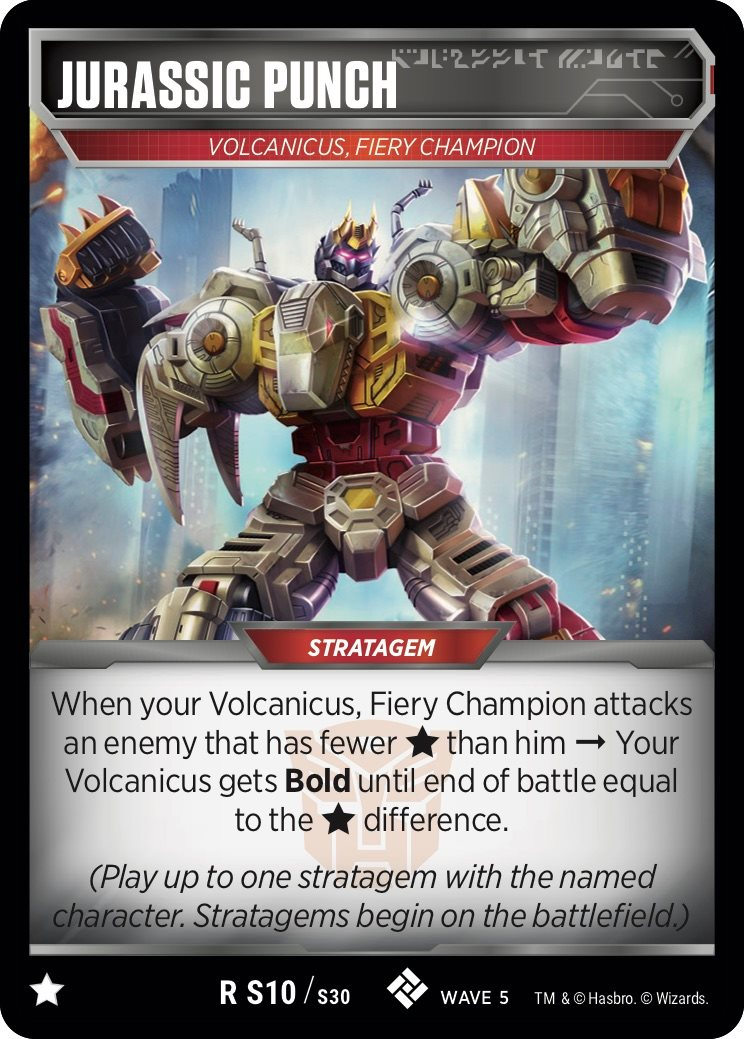 RJ: I’m having trouble analyzing this card and figuring out how good it is. I immediately thought of Daring Escape, but unless you can figure out a way to play DE mid-attack, I don’t think it is going to work out. As of now, without more cards being revealed, I still think Grimlock is going to have a hard time reliably attacking twice to bring in the other two Dinobots. I won’t say what blue-based weapon (orange pip, but needs blues to function well) this pairs well with for fear of summoning him and not hearing the end of it. The name of the card is A+, though.

Joe: I currently do not see this card giving Volcanicus players what they need to put him on the table.  Maybe there is something in the future that will make this card an auto-include. If you are attempting to utilize some orange version of Volcanicus with this, I hope you can get him out fast enough.

Tom: This isn’t quite the fix that I was hoping for and I probably still won’t play Vocanicus. 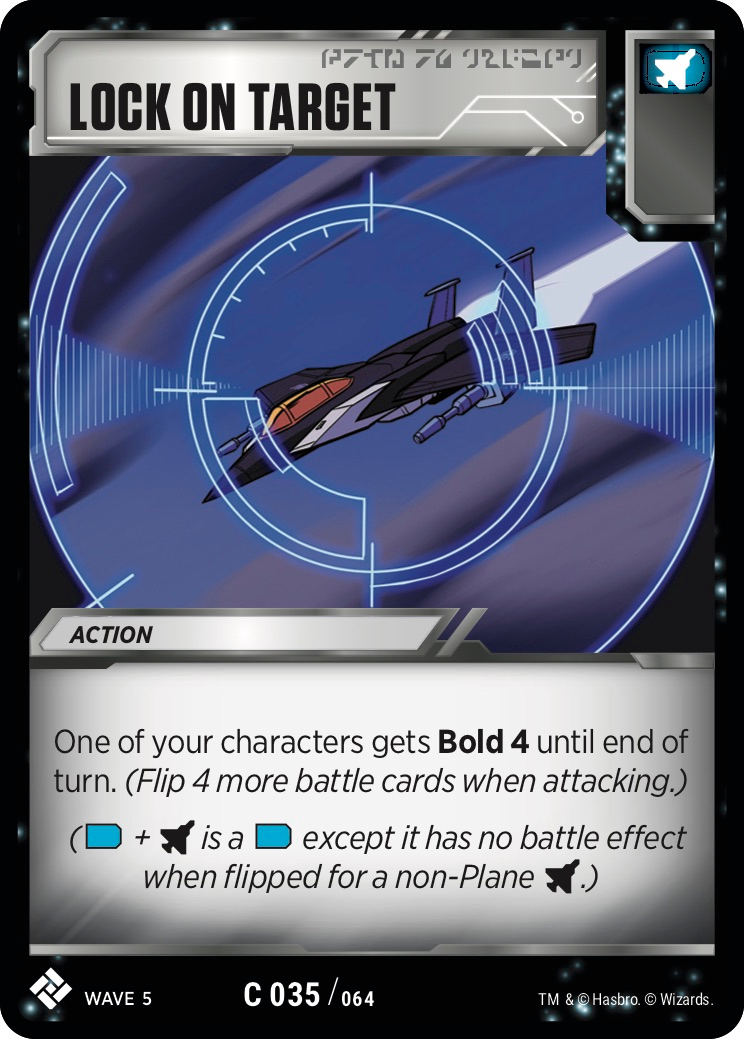 RJ: Essentially a blank pip bold four, which seems fair. What is really good about this card, that Joe pointed out in our group chat, is that the character gets bold until the end of turn and not the end of battle. People like Blurr really like this card, or anyone that can attack twice in a turn. I’m curious to see what other support they add for planes to see if this is viable in those archetypes as well!

Joe:  This card jumps out at me and screams Daring Escape + Anticipation Cars.  If you are unfamiliar >> https://www.youtube.com/watch?v=dAI5d8K3gzI&t=1298s
Also, whenever I see the word Bold on a card with a blue pip, my immediate focus is Thermal Weaponry.  Can planes get more black/blue support while passing damage to the opponent? Can they survive or will they continue to be made of paper mache?

Tom: My first thought was something along the lines of who thought it was a good idea to give the Air Strike Patrol more bold.  I keep trying to toy with a pierce planes deck and it looks like it has some help now, but flipping this on defense while in bot mode is gonna feel bad.  No one has talked about sealed though, this card being a common will be easy to grab and bold 4 in that format blank card or not can do some damage. 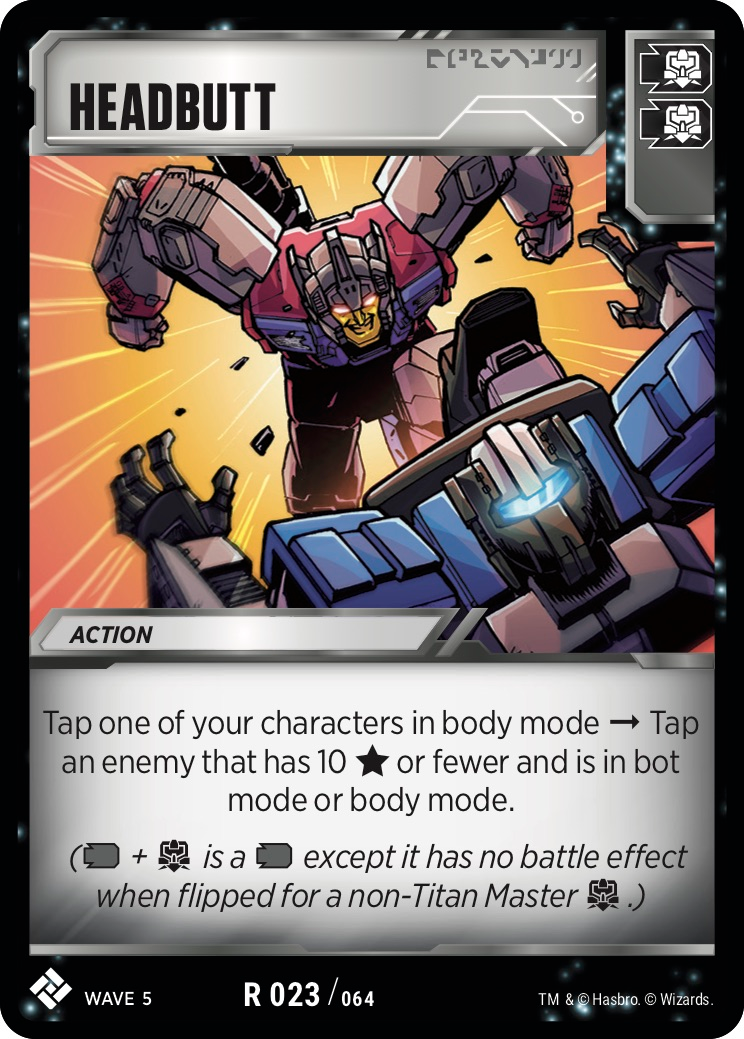 Brian:  This is an incredibly interesting card, especially if we see some cheaper body options become available, which presumably is going to happen.  I vaguely recall Drew teasing a one-star cost Titan Master, so we should presumably be able to take a combination that costs less than ten stars total.  It’s notable that this doesn’t have the same limitation as Tackle, where the opposing character you tap must be the same star cost or less as the friendly character you tap.

RJ: I can see this card being a staple in every Titan Master deck as the ability to tap down your opponent with no restrictions of your own is super powerful – there is a reason we haven’t seen much of it in the past. It’s an easy card to sideboard out if your opponents characters don’t match the extremely friendly limitations. This is essentially a reverse Ready for Action that has pips on it for your Titan Master to use on attack. 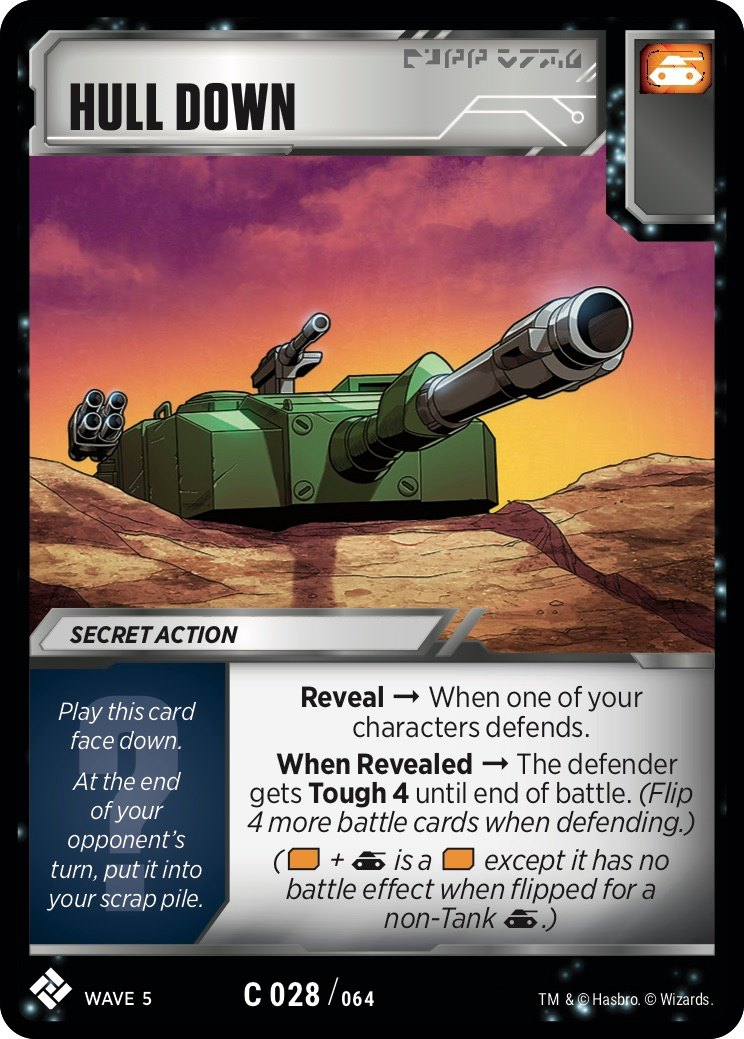 RJ: Much like Lock On Target, this is essentially a blank pip Tough 4, while Hidden Fortification is “on-color.” This may be more useful in sealed than constructed, at least for now. The thing about green pips, I think, is that you want to see them on your defensive flips so you are guaranteed to be able to use them on your very next turn. If you pull something in on your attack, your opponent has the chance to disrupt you and tear that card you just picked up from your hand. Tough 4 on defense gives you at least 6 chances to see a card you may need for your next attack. I don’t think the card synergizes with tanks specifically, but the restrictions are on it for more balance reasons. Same with Lock On Target. This is different from Lock On Target in the sense that the tough only lasts until the end of battle instead of the end of turn. 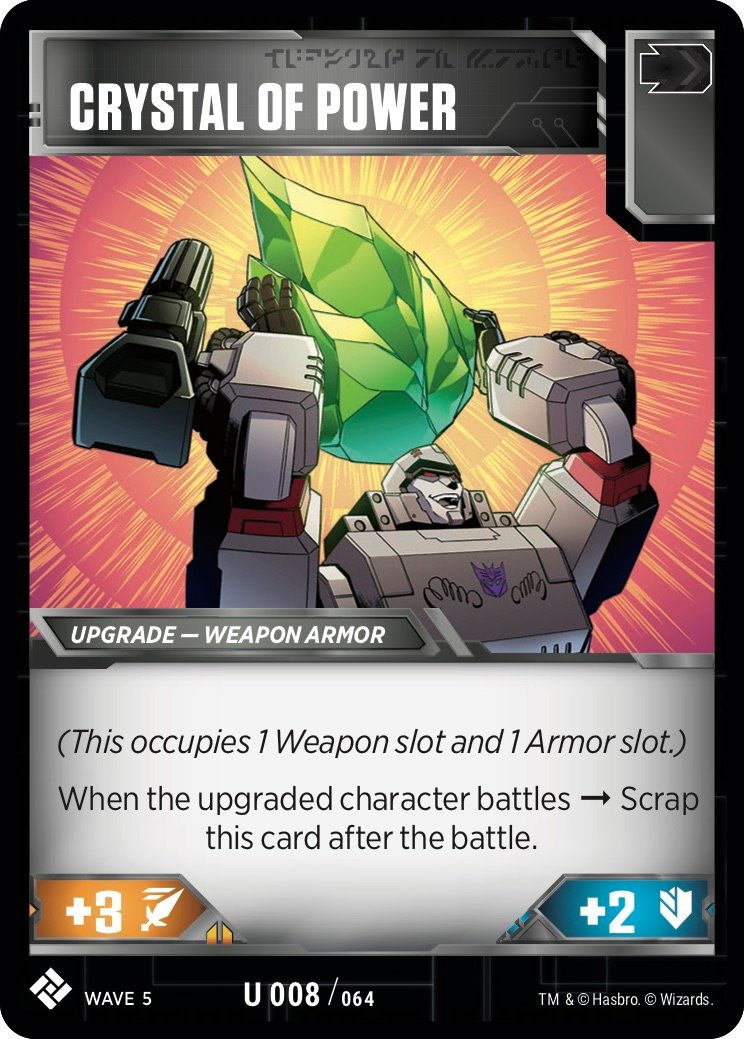 Tom: We just had a conversation about Soundblaster and that he needs more black weapons and here it is.  I think this card has a lot of upside, especially with cards that can cheat it in. Jetfire1, Triggerhappy, Hunker Down, Detritus.  The downside being it scraps on battle so on attack or defense so you do need to watch your timing. It could be a good candidate for a SixGun deck scrapping it for bonus attack and then picking it back up with a partner like Jetfire1 on your next turn.  Also how bout that art, have you ever seen a Megatron so happy?

Brian: My brain immediately goes to Megatron Living Weapon.  Begin with Megatron in bot mode. Assuming Crystal of Power is in the scrap, play Hunker Down.  Megatron flips to bot mode, pull on Crystal of Power as an armor off of Hunker down. Use Megatron’s flip to alt mode to grab a weapon from the scrap, then flip back to bot mode and equip the weapon you just grabbed.  After that, murder someone’s face off. It certainly won’t be competitive, but it’ll definitely be fun.

Joe: People will be looking for ways to recur this and/or play for free at all costs.  Soundblaster comes to mind immediately as well as wave 1 Jetfire. Triggerhappy is also another option but a tad slower.  Backup Bag may also begin to wind up in decks with CoP. Looking forward to seeing more mixed upgrade types in the future. What will be the first upgrade to take up all 3 slots?

RJ: I think this card is super good right off the bat, and with a ton of characters that can cheat this into play it only becomes that much better. +3/+2 for a turn is bonkers, and if you pair it with Demolisher, it really becomes more of a +5 attack for him in an orange-heavy deck. Adding in the fact that this is an Uncommon and sealed just got even quicker than it already is!