Week 3 and I may have already run out of “clever” things to lead us into the weeks spoilers. It’s been a hectic week as the spoilers really poured in and I struggled to keep up with them. With that being said, we did our best to break down most of the spoilers from the last week and any that we missed this week will be covered next. Maybe. 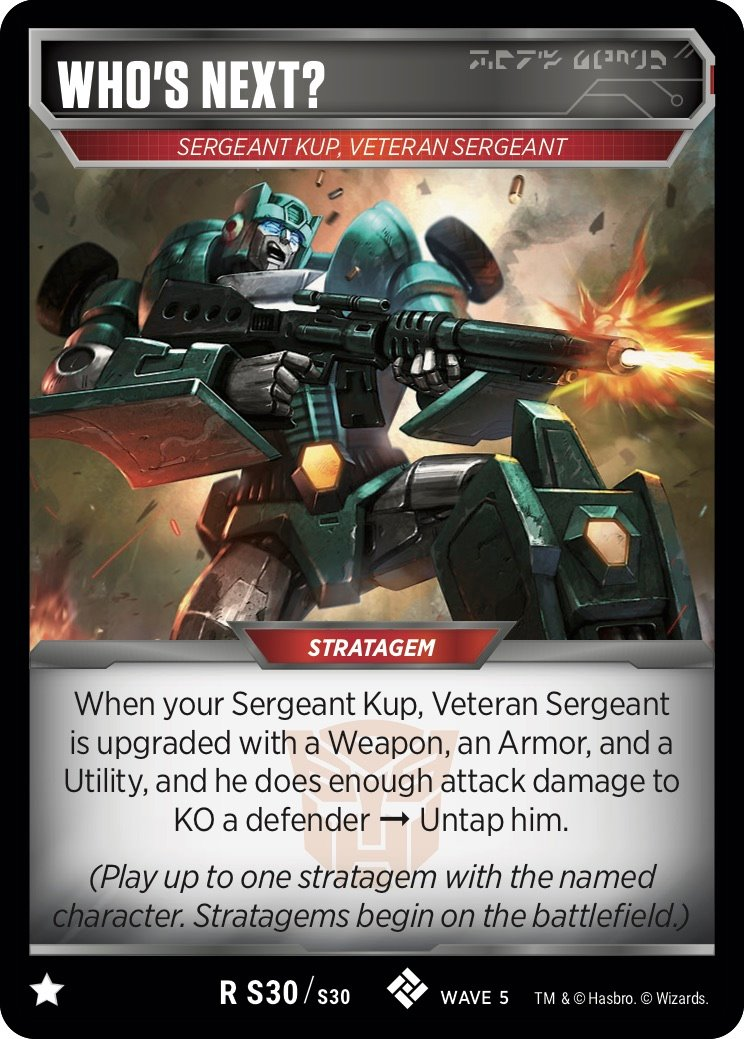 Joe:  Dear community.  If we can Kup meme so hard that WotC stratagems (can i make that a verb?) him, what other character could we put actual meme effort into?  (note: I have no insider information whatsoever that the Kup memes are directly related to the stratagem creation) Naturally, we are all going to test this, aren’t we?

RJ: I paired Kup with Wave 4 Springer somewhat recently and was able to cheat out multiple Cargo Trailers a turn on Kup. Yes, you read that right, multiple Cargo Trailers a turn. It’s possible to get the entire suite of upgrades out on Kup in one turn and swing and KO someone that same turn. The question is, do we really want to invest a star to do that? I think I speak for the entire TFTCG community when I say “absolutely we do.” 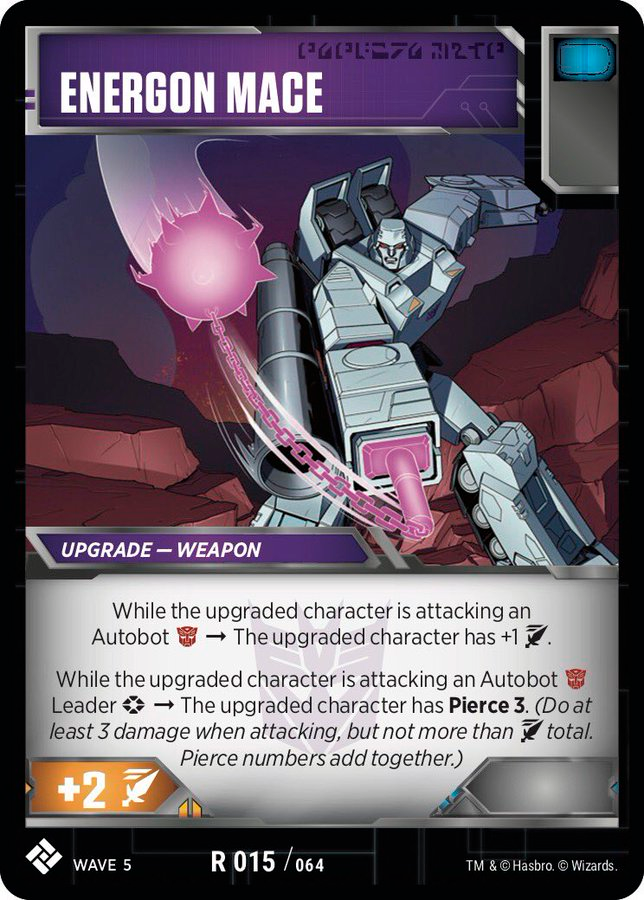 Joe: Seems like this card is for limited formats.  Possible sideboard card for constructed?  Way too specific for me to put in a mainboard deck.

Brian: I hate OPBL.  I have grown to hate Galaxy Optimus.  Yes, please to sideboard this bad boy.

RJ: A Primary Laser with upside. As Joe mentioned, I agree that this is both a limited and sideboard card. The artwork on this is absolutely fantastic as well. Joe:  Trying to evaluate all these Titans and Heads is difficult because we don’t have the full picture.  Wolfwire should essentially net you 1-2 cards, maybe 3-4 if you surround him with a blue build and a better head?

RJ: Getting cards into your hand for free is always fun, so his body mode ability appeals to me. I wonder if you can use his ability and then potentially swap another card in your hand for another green pip that was flipped? 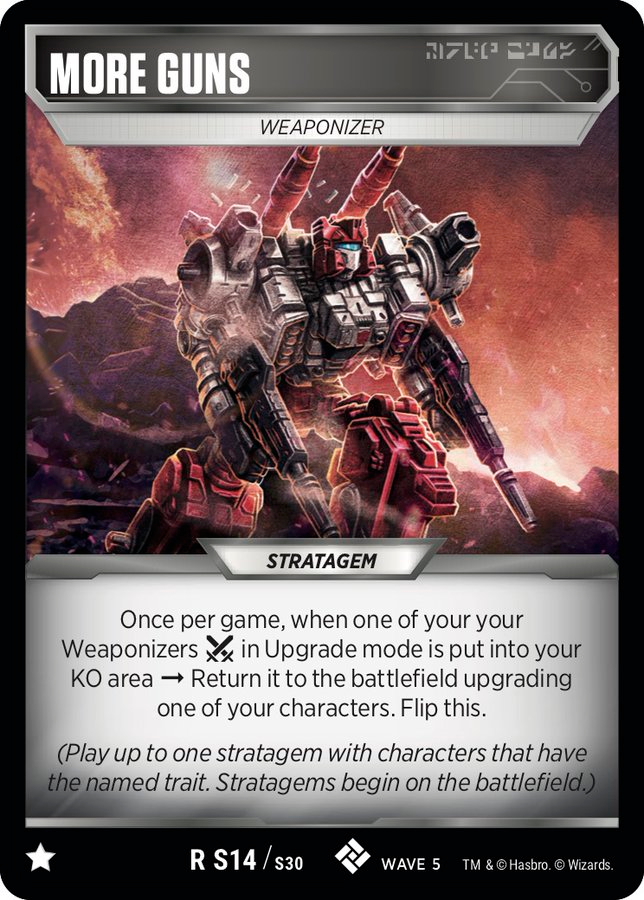 RJ: I’m interested in the timing of this card, and whether this is (to borrow a term from another game) a forced response or not. Obviously the effect itself is strong, but if your opponent is able to dictate who and when you bring back then I’m less bullish on this card. What I mean is, if your opponent scraps the MTX-M2 Anti-Gravity Cannon (+1 atk, Pierce 4) from one of your characters via a Vaporize but you still have the MTX-S2A Guided Missile Launcher (+3 atk) in play, does my Stratagem force me to re-equip the former or can I wait until the latter is scrapped and bring that back to play instead? Otherwise this card is pretty straight forward and you get a guaranteed use out of it rather than having to hope to draw Quartermaster.

Joe: With how easy it is to remove upgrades in this game, spending another star on any of the current weaponizers doesn’t do it for me.  Maybe this is a future proofing thing and we will see some lower cost weaponizers in the future? Maybe we will see more Private Greenlight type abilities? Joe:  Just like the Mace and Shield, I do not like characters that potentially have dead abilities.  Skullsmasher’s Body mode side looks fun though. Trying to control how your opponent may be tapping their characters can be manipulative.  Grax looks to be a head that will see play. Essentially +10hp overall is big.

RJ: These guys look awesome – both in terms of art and playability. Grax, who I will constantly call Drax accidentally, seems like the best Head reveal to date as he can fit into any deck archetype for only 3 stars. Skullsmasher himself looks awesome as well, and when paired with Grax he becomes a 14-star, 19-health behemoth. Even as a huge Autobot fan, it’s great to see the other side getting some much needed support. Guaranteeing 3 damage every time you attack the good guys while in Alt mode is nothing to sneeze at but it’s his Body mode ability that has me giddy. I think he will work best in a control shell as he will often dictate who your opponent is forced to attack with. I envision a lot of scenarios where your opponent attacks with someone they aren’t ready to attack with yet because tapping down anyone else will either kill them or put them in range of being killed with direct damage. I’m really excited to try this guy out.

Brian: I don’t have anything to add other than I love all the animalistic Decepticon Headmasters.  I’m excited to see what they have planned for Mindwipe. 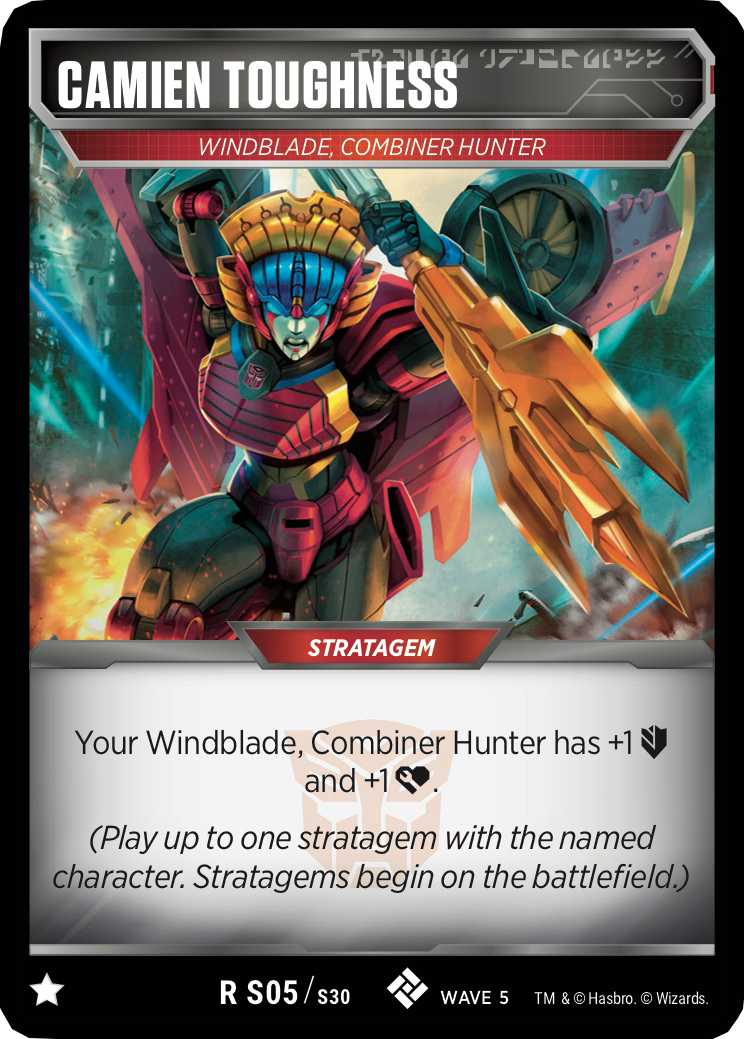 RJ: I think this card is fine – I don’t think it’s game breaking nor do I think it’s as bad as some people are making it out to be. Plus one defense in both modes is pretty insane, and this puts her ahead of the curve for many similarly costed bots. Both OPBL and General Megatron have 3 defense, but only in alt mode whereas Windblade gets it in both modes. The +1 health seems a little underwhelming at first glance, but Windblade is more buoyed by the +1 defense than the health – you can’t really put a number on it (at least not with the time I currently have) but the +1 defense essentially amounts to an extra ‘x’ number of turns. As Nick mentions in the linked video, how many times do you win or lose a game by one hit point? This can buy you an extra turn or two since the +1 defense will add up over multiple attacks, and then you add the extra 1 health on top of that.

Without knowing what else is coming out battlecard wise, there are still plenty of blue/black/green pipped cards that allow you to use her ability effectively. No, not every single one of the 30 Stratagems are going to make old cards super competitive (nor should they, nor do I believe that is even the intent in the first place), but I believe they’ll allow older cards to be more viable than they once were.

Joe: I would liked to have seen something stronger for 1 star on a character that isn’t too threatening.  Maybe this is WotC testing the waters and slowly power creeping up to something better? Would giving her +2A/+2H/+2D been worth a star?  What about if her Pierce 4 clause was “Stratagemed” by eliminating the word Combiner? WotC can always sprinkle Stratagems into future sets if they wish.

Brian: Like Joe said, I’m surprised that they didn’t do something to expand her bot mode side.  Maybe even just have it kick in while attacking a character with 13+ stars.

RJ: I’m uncomfortable. Brian and Joe have more or less agreed twice in the same article. Everyone should prepare themselves for the impending apocalypse now. 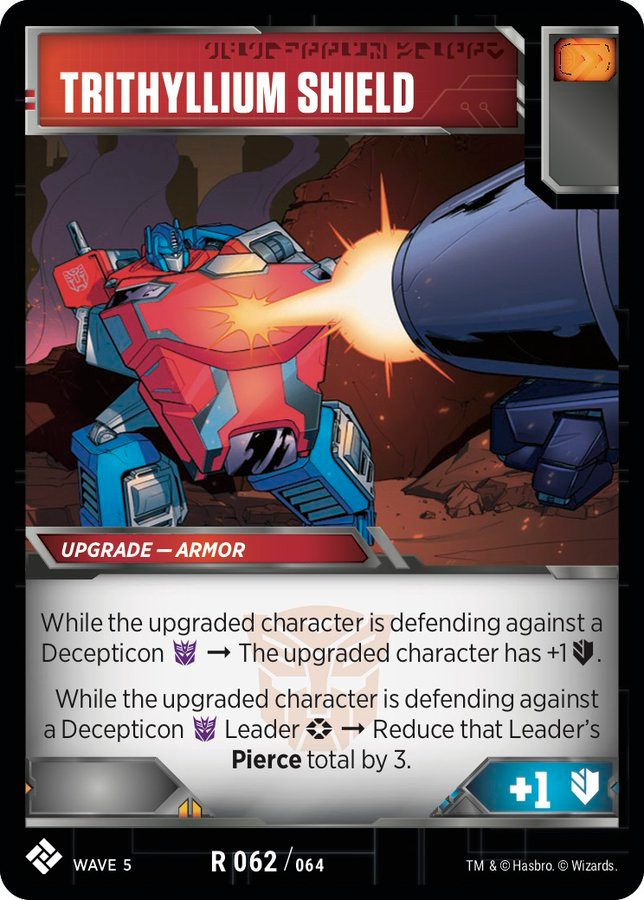 Joe: Seems like this card is for limited formats.Possible sideboard card for constructed?  Way too specific for me to put in a mainboard deck.  Dejavu?

RJ: As Joe mentioned, I agree that this is both a limited and sideboard card. The artwork on this is absolutely fantastic as well. Wait a minute…

Brian: The only thing that gives me pause here is that both this and Mace are both Rares.  I’d assume that if it was meant to be a limited staple, it’d be a Common or Uncommon?  Either way, I’m glad that, at least at first glance, the Autobot version of this card is “weaker.” 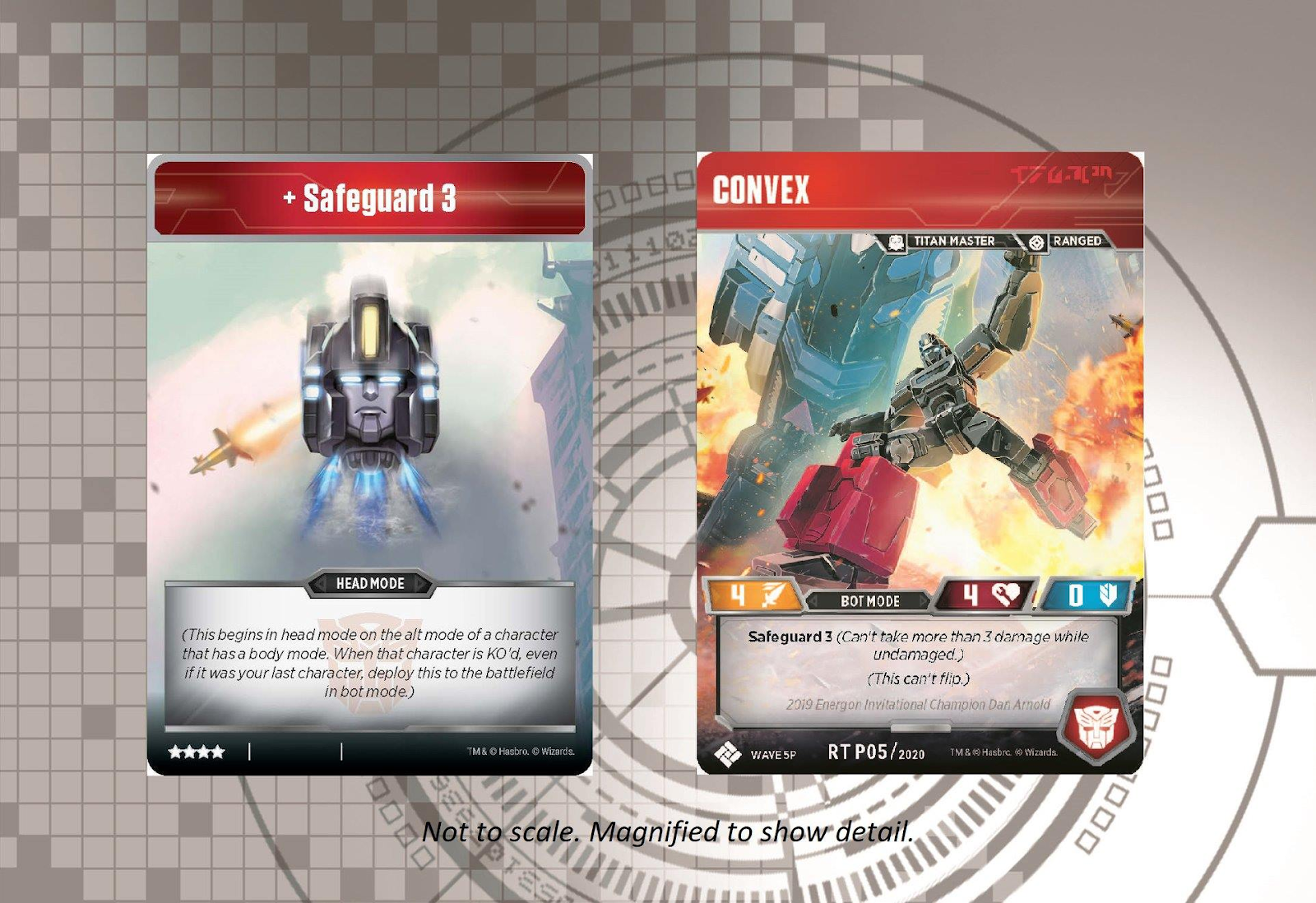 Created by Dan of VectorSigma.Info

Joe: The Wreckers keep pouring in.  Thank you to Dan for adding to the tribe!  First off, Convex is to be an annoying little bonus.  Thankfully he is 4 stars so it will come at a price. Perceptor’s ability immediately says Nemesis/Cosmos/DE to me.  We will see how many flip battle cards we can cram into a deck to abuse this guy.

RJ: Kinda bummed that they didn’t give Perceptor the Microscope trait – does that mean we aren’t getting any Microscope support cards ever? Ever, ever? Other than that, all I can say is “finally.” Perceptor being one of my favorites since I was a kid, it’s nice to see him get proper representation. We haven’t seen a ton of cards with Safeguard get play, so pairing Perceptor with someone like Grax might be more beneficial. Perceptor’s ability seems super strong as well since you’re either giving your opponent card advantage or buffing Perceptor up. Will be interesting to see how he plays out. 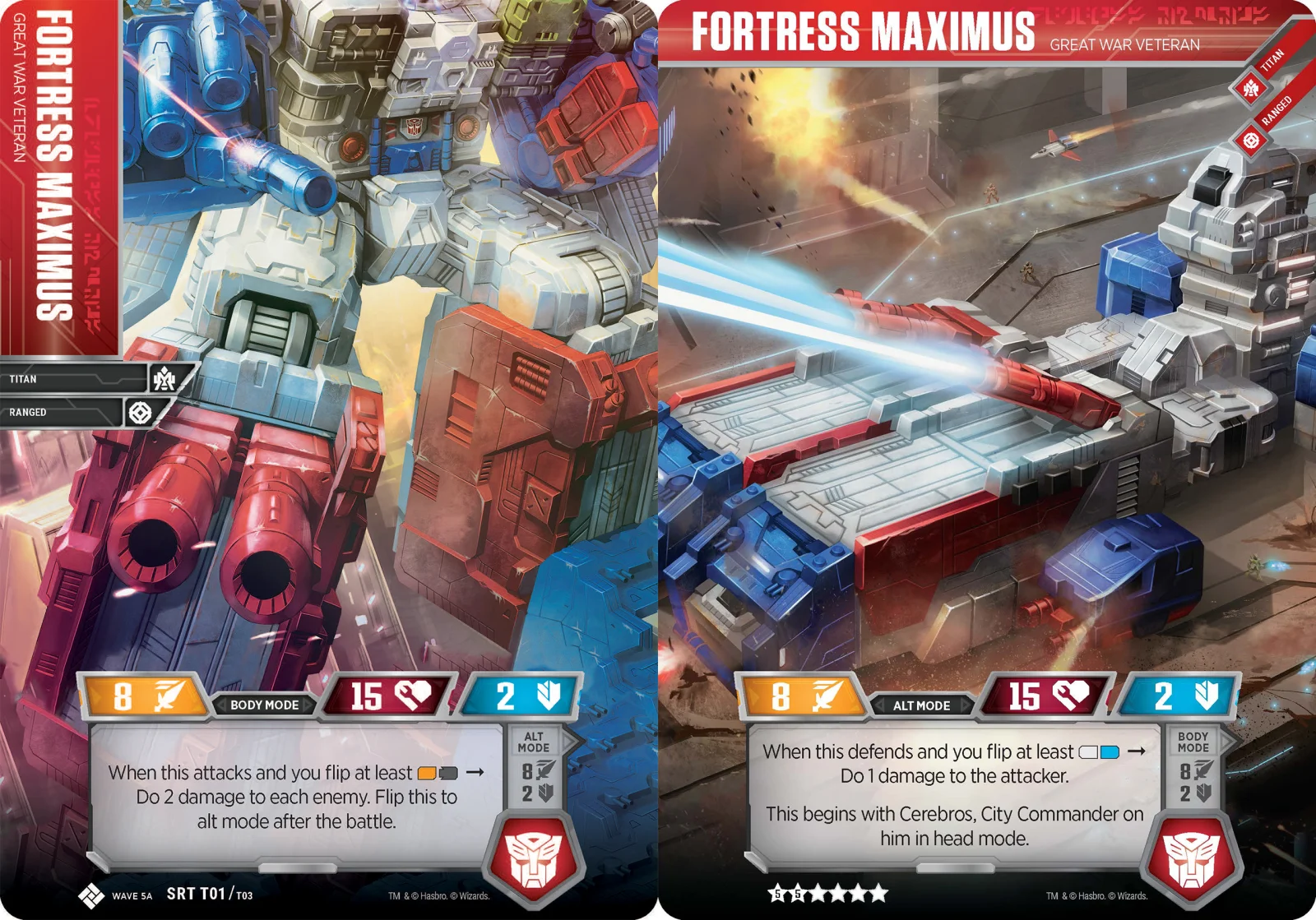 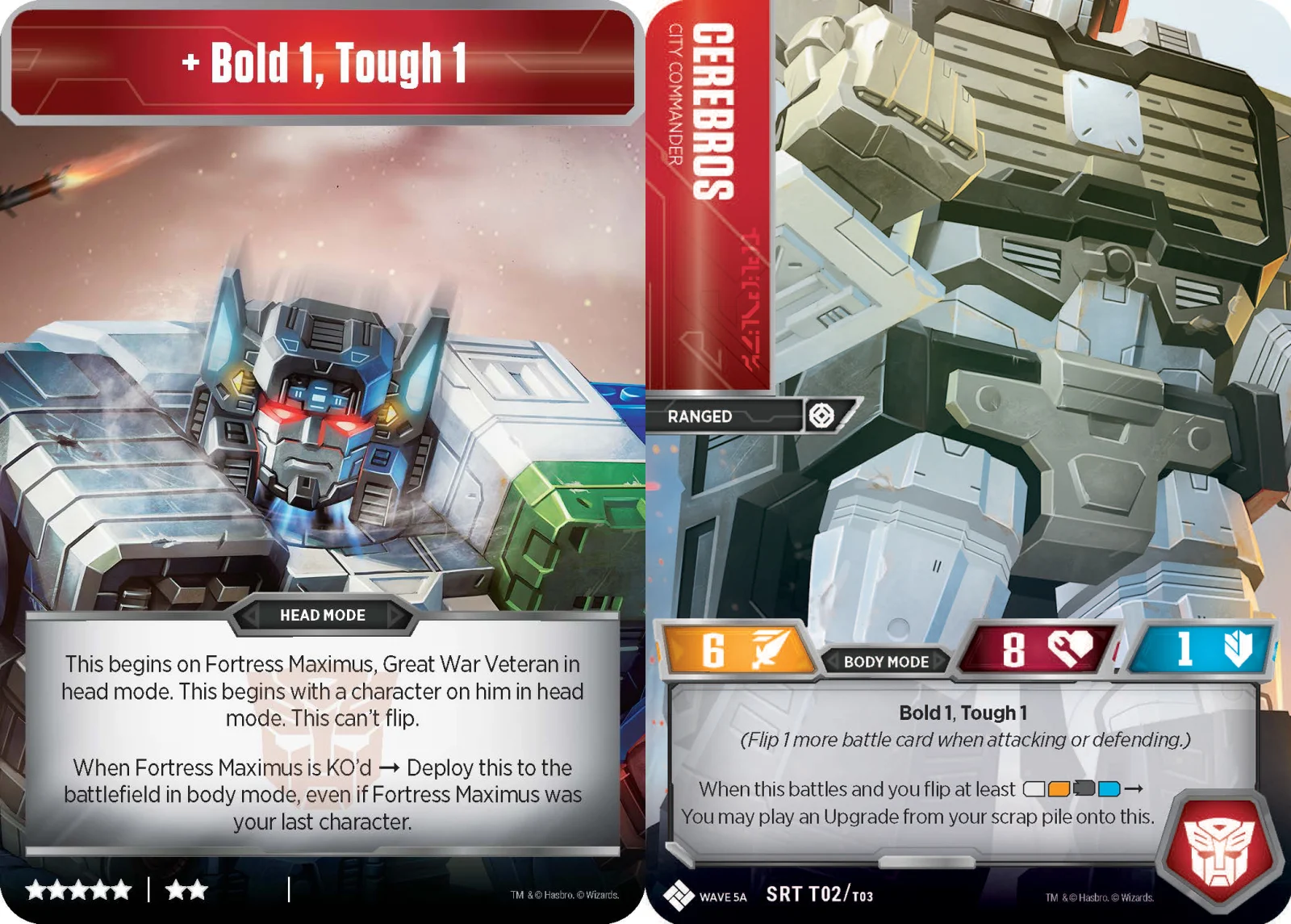 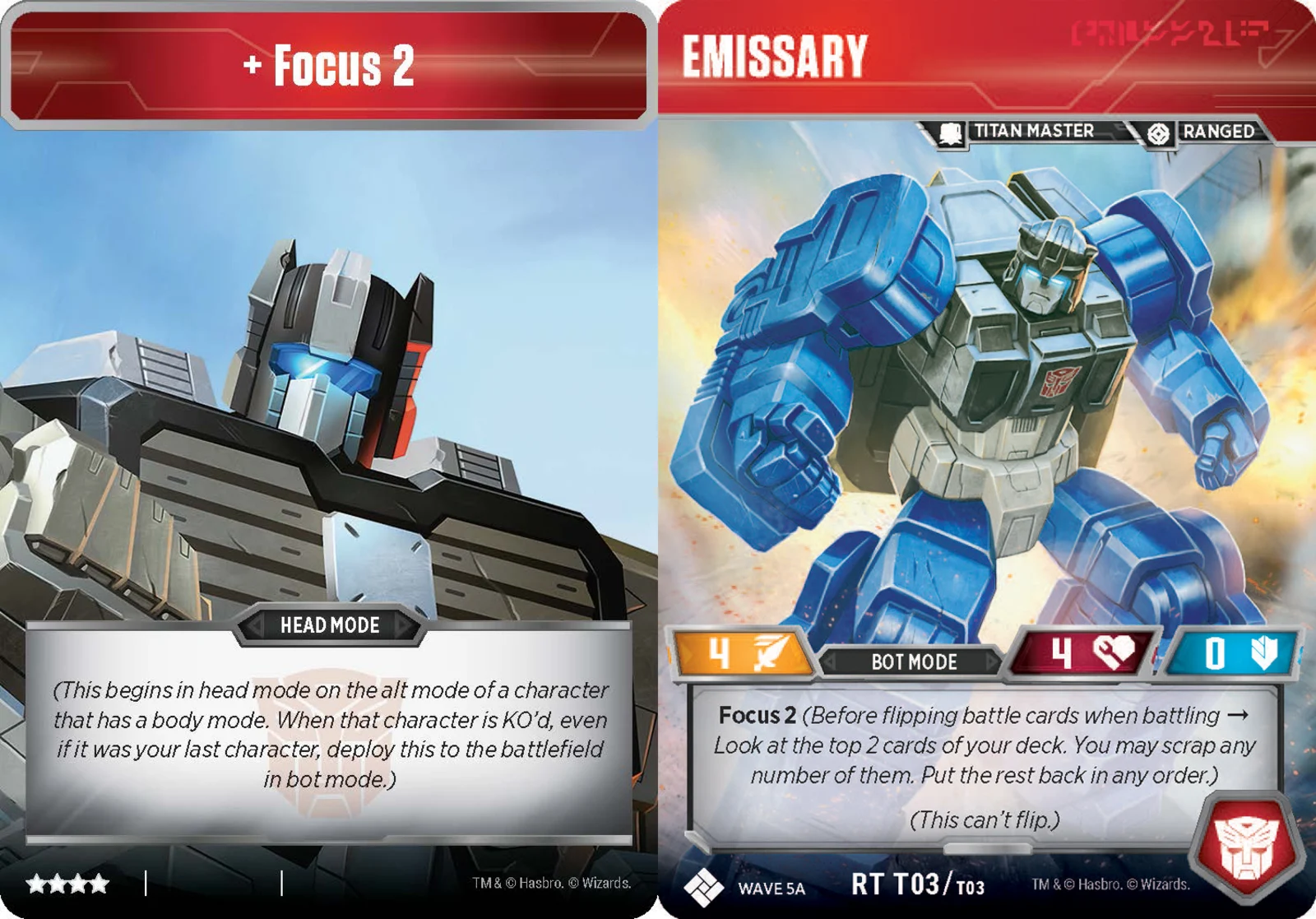 Joe:  I don’t even know where to begin with this guy.  Aggro? Turtle? Mixed? OA? Being a solo character on the battlefield like Metroplex makes me weary of attempting an aggro build.  Something tells me I am going to gravitate towards something heavy black/blue. Emissary not working with Fort Max for Focus 2 makes me want to avoid an OA type build…….

Then I stare at Cerebros and want to make an OA build……  Will Cerebros stay on the table long enough to get 3 upgrades on him?

Emissary as your last man standing with only Focus 2?  I wonder how many games he can close out.

RJ: My grandparents had Russian nesting dolls that I was obsessed with as a kid anytime I went over there. And now we have grown up Russian nesting dolls. I’m pretty excited to give Fort Max a whirl after this reveal. Much like Joe, I am having so many thoughts running through my mind on how to build him since obviously all his abilities scream “mix pip” deck. Though is it more efficient to just focus on one ability and go from there? We also finally get a second character that we are able to use Height Advantage with, so mixing colors makes a little more sense.